O-Lineman Turner Corcoran Back at Practice for Nebraska Football 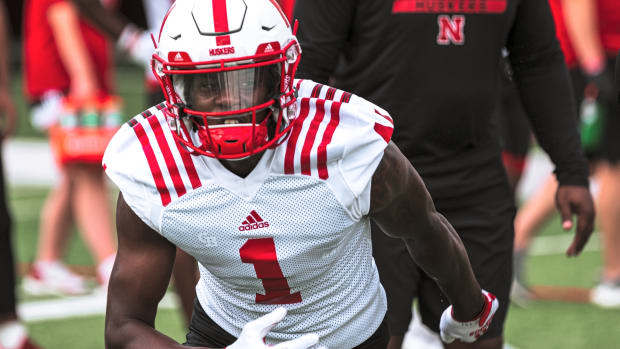 There was good and bad news Saturday on the injury front from Nebraska football camp.

Head coach Scott Frost said after practice that offensive lineman Turner Corcoran, a likely starter at left guard, had “missed a couple days, but he was back out there for the last two” practices.

Corcoran’s absence had been noted Wednesday by reporters who observed part of the Huskers’ practice. Frost said he’s not worried about Corcoran’s availability for the Aug. 27 season opener.

The news about Decoldest Crawford wasn’t so good. The true freshman wide receiver (pictured above) will be out for an extended time with a knee injury, Frost said.

“It was in our last scrimmage,” Frost said. “It was the only major injury we had. Felt terrible for him, but he’ll come back.”

Frost was upbeat about his new kicking and punting specialists (“What I’ve seen from them, we’re going to be vastly improved”) and his stable of running backs (“Our running back room has really made a giant leap”).

Saturday’s practice was the 14th of fall camp and came 14 days before Nebraska starts the 2022 season against Northwestern in Dublin, Ireland. The team will scrimmage Sunday, take a day off Monday and then turn its full attention to preparing for the Wildcats on Tuesday.

“A lot of decisions will be made probably after tomorrow,” Frost said. “We’ll have a pretty good idea on the depth chart. Not sure when we’ll release it. … Then it’s about getting a team ready to fly overseas and play.”

The team departs for Ireland on Aug. 22. Nebraska will take 110 players and suit up 74.

Scroll past the Frost video for more coverage of Saturday’s session. Refresh this page to see the latest additions. Asterisk indicates subscription may be required. Go here for the HuskerMax discussion.