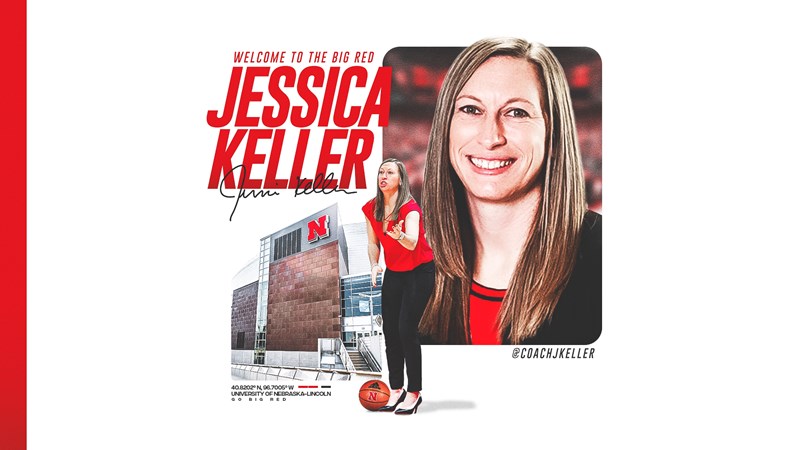 Keller comes to Nebraska after spending five seasons as an assistant at Illinois State, including two seasons as the associate head coach. In her final season with the Redbirds, Keller helped lead Illinois State to the Missouri Valley Conference Tournament title and a bid to the 2022 NCAA Tournament.

“We are thrilled to add Jessica Keller to our Husker women’s basketball staff,” Williams said. “She is an outstanding basketball mind with great teaching skills and she has established herself as a person of high character and integrity. She is a tireless worker that fits perfectly with the culture here at Nebraska, and I am excited to have her pouring into the young women in our program.”

Before serving five seasons as an assistant at ISU, Keller spent three successful seasons as the head coach at Columbia College in Missouri.

Keller compiled a 75-24 overall record in three seasons at the NAIA level, including a 55-17 mark in the American Midwest Conference. She coached the Cougars to a pair of NAIA Tournament appearances. Columbia opened her second season as head coach with a school-record 19 consecutive wins and achieved the highest ranking in school history at No. 3 in the NAIA Division I Coaches’ Poll. Her Cougar teams were ranked in 31 out of 34 polls during her tenure.

Keller’s teams played tough defense at Columbia College, holding opponents to a school-record 56.6 points per game in her final season in 2016-17. It broke the previous record set by her 2015-16 Cougar squad. She was named to the Women’s Basketball Coaches Association’s (WBCA) 30 Under 30 Inaugural Class. She coached 10 all-conference and five All-America selections in three seasons at Columbia College.

Academically, Keller implemented standards to achieve NAIA Scholar Team recognition (3.0 team grade-point average) each season, which were the first times the program achieved the award. She also incorporated a variety of service activities for team engagement, as the Cougars led the athletic department in team service hours for the 2016-17 academic year.

In two seasons working with Thiesse in Mankato, Minnesota rolled to a combined 49-12 record and advanced to the second round of the 2013 NCAA Division II Central Region Tournament. Overall, in three seasons at Minnesota State, Keller helped the Mavericks to 67 victories. She served as the team academic coordinator and helped the Mavericks rank among the top-25 teams in GPA for NCAA Division II. She also served as the athletics liaison to the admissions office at Minnesota State.

Before coaching at Minnesota State, Keller was a two-year graduate assistant coach at Quincy University in Illinois, where she completed her master’s degree in business administration.

The Belle, Missouri, native played collegiately at Quincy from 2005 to 2009. She capped her career as an honorable-mention WBCA All-American and a second-team CoSIDA Academic All-American in 2009. Keller was a three-time All-Great Lakes Valley Conference performer, and was named the GLVC Player of the Year as a senior in 2009. She graduated as the school’s career leader in points (1,823), steals (324), free throws made (487) and free throws attempted (652).

A double-major in accounting and finance, Keller graduated with honors and earned the GLVC’s Richard F. Sharf Paragon Award, which combines academics, athletics, leadership and character.