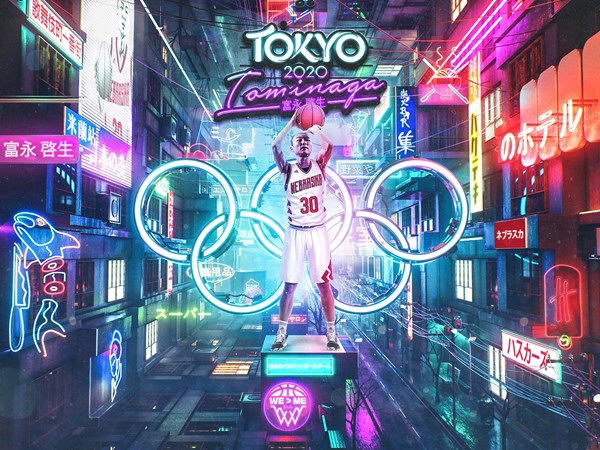 Husker men’s basketball signee Keisei Tominaga (pronounced Kee-sea Toe-may-nawga) will represent his home country in the Tokyo Olympics, as he was one of four players selected for Japan’s 3×3 basketball team this week.

Tominaga, a 6-foot-2, 190-pound guard, is the youngest member of the four-player Japan team, as 3×3 basketball makes its Olympic Games debut in Tokyo.  He will be the third Husker basketball player to play in the Olympic Games, joining Aleks Maric (2012, Australia) and Ade Dagunduro (2012, Nigeria).

The 3×3 competition runs from July 24-28 with pool play the first four days along with the quarterfinals. The semifinals, bronze and gold medal games will take place on July 28. Japan will play each of the other seven qualifying teams in pool play before the quarterfinals.

Tominaga, who will have three seasons of eligibility at Nebraska, spent the last two seasons at Ranger (Texas) College, helping the program to a 22-4 record and a NJCAA National Tournament semifinals appearance in 2021. He garnered second-team NJCAA All-America honors in 2021, averaging 16.3 points per game on 51 percent shooting, ranking ninth in 3-pointer per game (3.4/gm) and 19th in 3-point percentage (48.7). He earned a spot on the NJCAA All-Tournament team, averaging 20.3 points, 3.5 rebounds and 2.5 assists and per game, including 26 points in the national semifinals. In his two seasons at the school, he connected on 198 3-pointers, hitting at a 48 percent clip in that span.

The Olympics continues the upward trend for Tominga in his native country, as he was named to Japan’s B National team, which consists of some of the top prospects in the country, in August of 2020.  Previously, he starred for Japan’s U-18 team at the Asian Championships, averaging 19.3 points per game to rank fifth among all players in the competition. Tominaga had three 20-point games in the tournament to lead Japan to a fifth-place finish, highlighted by a 33-point performance against Bahrain.