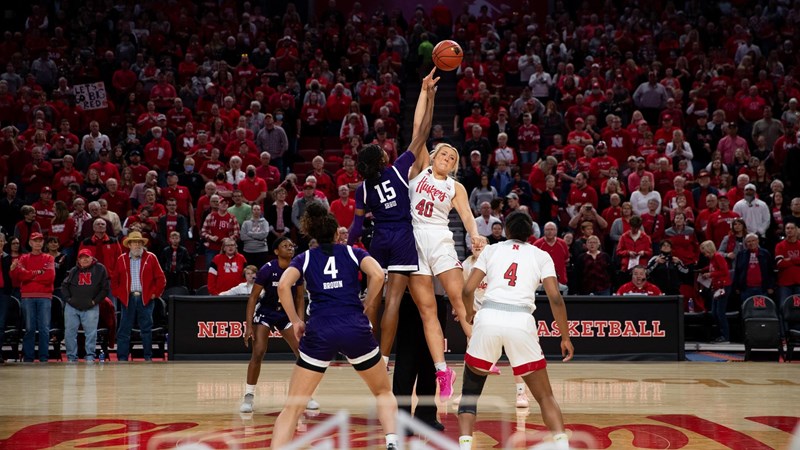 The Nebraska women’s basketball team will tip off its 2022-23 regular-season schedule by taking on Omaha at Pinnacle Bank Arena on Monday, Nov. 7.

The game between the Huskers and the Mavs is expected to tip off at Noon following the Nebraska Life Skills Sportsmanship Pep Rally at Pinnacle Bank Arena earlier in the day. Last season, the pep rally welcomed more than 1,500 middle-grades students from nearly 30 school districts across the state of Nebraska. The event, which has been co-sponsored by the Nebraska High School Hall of Fame, features positive messages from Husker student-athletes, coaches and athletic administrators.

The contest will mark the first regular-season meeting between Nebraska and Omaha since a 66-58 Husker victory over the Mavs at Pinnacle Bank Arena on Nov. 22, 2016, which marked Coach Amy Williams‘ fourth game as Nebraska’s head coach. NU leads the all-time series with the Mavs 16-9, including an 80-44 victory at the Bob Devaney Sports Center on Nov. 26, 2010. Those are the only two regular-season meetings between the two programs in women’s basketball since 1986.

Nebraska returns five starters from a team that finished 24-9 last season and advanced to the 2022 NCAA Tournament. Omaha returns four players who started at least 10 games a year ago, led by graduate center Elena Pilakouta (9.8 ppg, 4.6 rpg). Sophomore guard Grace Cave added 7.4 points per game as a true freshman in 2021-22, after leading Weeping Water to the Nebraska Class D1 State Championship in 2021.

After opening its regular season at home against Omaha (Nov. 7), the Huskers will return to Pinnacle Bank Arena to take on Houston Baptist on Friday, Nov. 11. The Big Red will play its third regular-season non-conference home game against Tarleton (Tuesday, Nov. 22).

Nebraska will return to home non-conference action against Samford (Saturday, Dec. 10), before welcoming Wyoming to Pinnacle Bank Arena for the second straight season. The Cowgirls, who will be under the direction of first-year head coach Heather Ezell, finished 17-13 last season and played three overtime games in the Postseason WNIT. Last season, Nebraska defeated Wyoming 72-61 (Dec. 22, 2021) in Lincoln.

In addition to Nebraska’s six regular-season home non-conference games that have been announced, the Huskers will also take on Washburn (Sunday, Oct. 30) in their lone exhibition game at Pinnacle Bank Arena. Times and television/live streaming information will be available for all of Nebraska’s games at later dates.