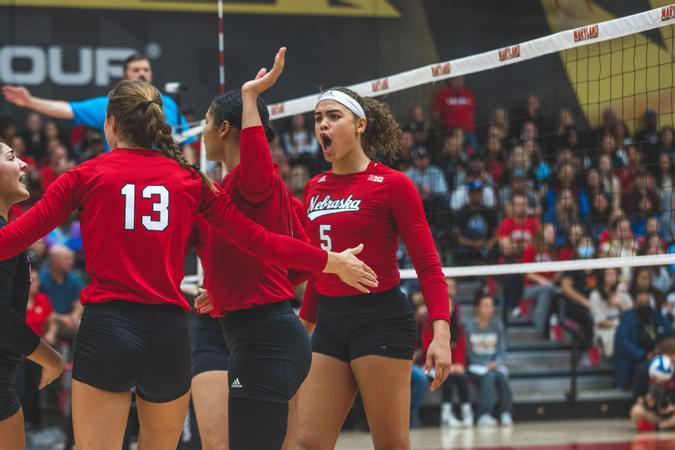 The match was a defensive battle as Nebraska hit .099 but held Maryland to .046. Maryland, the No. 1 blocking team in the country, outblocked the Huskers 17-13. But the Huskers won the serve game with seven aces and five errors compared to four aces and six errors by the Terrapins.

Whitney Lauenstein had 11 kills, seven digs, six blocks and four aces. Bekka Allick was the most efficient Husker on the day with nine kills on .571 hitting with four blocks. Madi Kubik added nine kills and 11 digs. Lindsay Krause and Kaitlyn Hord each had six kills. Hord finished with nine blocks.

Anni Evans had 19 assists, while Kennedi Orr had 18. Lexi Rodriguez had a match-high 19 digs.

Set 1: Maryland jumped out to a 7-2 lead, but the Huskers reeled off a 9-0 run to go up 11-7. Allick had a kill and a block with Orr, and Lauenstein had two ace serves during her run at the line. The Huskers continued to stretch their lead as Allick and Hord terminated kills and Orr served an ace to make it 17-10. Kubik and Hord tacked on kills for a 20-12 advantage. Maryland cut it to 20-15 with three straight points, but the Huskers regrouped after a timeout and got a kill from Lauenstein, a third ace by Lauenstein and a block by Allick and Orr for set point at 24-15, and the Huskers won 25-18.

Set 2: The Huskers started slow again, falling behind 5-2. But back-to-back slide kills by Allick and another ace by Lauenstein gave NU a 6-5 lead. Maryland went back ahead, 11-9, but the Huskers responded with kills by Hord and Lauenstein and the Terrapins committed two straight hitting errors to make it 13-11 Huskers. Lauenstein and Kubik connected with Orr for kills, and the Huskers pushed their lead to four at 17-13. Allick and Krause posted back-to-back kills, and another by Krause put NU up 22-16. After Maryland scored two in a row, Krause rolled another kill to the floor, and Hord earned set point for the Big Red at 24-18. The Terrapins came all the way back to within 24-23, but a hitting error gave NU the win, 25-23.

Set 3: Maryland took an early lead and never trailed in set three, leading by as many as five points at 18-13. Allick put down her sixth kill, and Maryland committed a hitting error before a block by Hord and Mendelson cut it to 18-16. But the Terps answered with three straight points to go up 21-16. However, Hord posted a kill and Maryland committed three straight hitting errors to let NU within 21-20. The Terps got a sideout kill, but a solo block by Hord kept the Huskers within one, 22-21. But three straight Husker errors ended the set in Maryland’s favor, 25-21.

Set 4: Hord and Lauenstein started the set with a block, and two kills by Lauenstein and another block by Allick and Lauenstein helped NU go up 7-3. Maryland got back within one, 7-6, but Allick and Krause tallied kills to make it 9-7. Ally Batenhorst entered the match in the fourth set and produced a kill before a block by Hord and Krause helped the Huskers to a 12-8 lead. Batenhorst added another kill before a block by Lauenstein and Hord made the lead five, 14-9. Two more kills by Lauenstein took the Huskers to an 18-12 lead, and Krause and Allick struck for two in a row to keep NU up by six, 20-14. Batenhorst’s third kill of the set made it 22-17, but the Terrapins reeled off five points in a row to draw even at 22-22. But a Maryland service error put the Huskers back on top, 23-22, and Hord and Lauenstein teamed up for back-to-back blocks to end the set and match at 25-22.

Up Next: The Huskers are on the road again next week at Michigan State on Thursday (7 p.m. CT) and at Michigan on Saturday (6 p.m. CT).