Huskers at the U20 World Championship 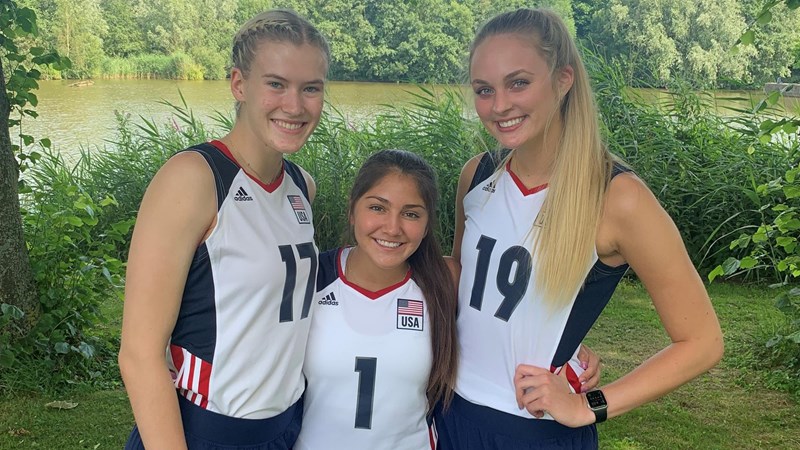 Team USA dropped the first two sets, saved three match points in the fourth set and came back from a 4-0 deficit in the fifth set to rally for a thrilling five-set victory over Poland to claim fifth place at the U20 World Championship. Batenhorst ranked second on the team with 12 kills in the match. Krause had six kills on 13 swings with only one error, posting a .385 attack percentage, and she was second on the team with three blocks. Rodriguez was credited with a match-high 18 digs, six more than any other player in the match.

Team USA dropped the first two sets but rallied to win the next two sets against a host Netherlands team that had lost only two sets in its first five matches combined. But the Netherlands took the fifth set 15-10 to win the match. Krause had eight kills and hit .263 to rank third on the team in kills. Batenhorst totaled five kills on 13 swings and added a team-high two aces. Rodriguez was credited with a team-high 10 digs.

Team USA suffered its first loss of the World Championship, following to Russia in four sets after previously defeating the Russians in the first round of pool play. Batenhorst led the United States with 12 kills, and she recorded two blocks and an ace. Krause totaled six kills with one block. Rodriguez was credited with a team-high seven digs for the Americans, which fell to 4-1 in the competition.

Team USA opened the top bracket of pool play with a 3-1 victory over Brazil, which finished as the runner-up in its pool during the first round of pool play. Batenhorst was second on the team with 11 kills, and she added two blocks and a pair of service aces. Krause finished with five kills on only nine swings. Rodriguez, the USA libero, and Batenhorst were each credited with nine digs.

Team USA finished its perfect first round of pool play with a sweep of Turkey. Batenhorst led the Americans in kills for the third straight match, finishing with 11 kills on .308 hitting. Krause had two kills and a block late in set three to help the Americans turn a one-point lead into a 22-18 advantage, and she closed out the 25-22 victory with a kill on match point. Krause finished with three kills on seven error-free swings with one block. Rodriguez served as the Team USA libero for the entire match.

After the first round of pool play was completed, Batenhorst led Team USA and ranked fifth among all players in the tournament with 36 kills.

Team USA made quick work of Thailand to win its second straight match. Batenhorst had nine kills, tying for the team high with Emily Londot, who was the national freshman of the year at Ohio State last season. Batenhorst produced her nine kills on only 17 swings, committing just one error while hitting .471, and she added one service ace. Krause had three kills on five error-free swings. Rodriguez was impressive again on defense as Team USA’s libero.

All three Huskers played key roles in the Team USA four-set victory, with Batenhorst (outside hitter) and Rodriguez (libero) each earning the start. Batenhorst led the Americans with 16 kills, committing only three errors on 37 swings to post a .351 attack percentage. Krause had two kills on eight error-free swings, and she also recorded a pair of blocks. Rodriguez served as the Team USA libero for the entire match.