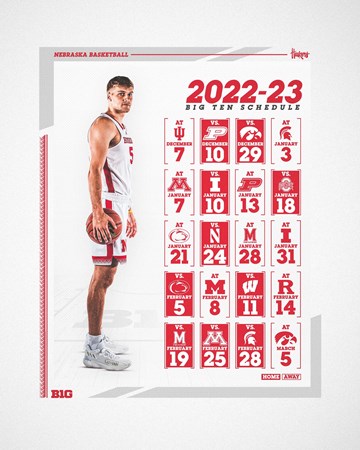 The Huskers will be tested early, as seven of the Huskers’ first eight Big Ten games are against NCAA Tournament teams from a season ago. The slate begins on Wednesday, Dec. 7, as the Huskers will travel to Indiana for their Big Ten opener. It will mark the third time in Fred Hoiberg‘s four seasons that the Huskers begin conference play at Indiana.

The Huskers will return to Pinnacle Bank Arena on Saturday, Dec. 10, for their conference home opener against a Purdue squad which reached the NCAA Sweet 16 in 2022. NU’s final Big Ten game of 2022 takes place on Thursday, Dec. 29, when the Huskers host Iowa.

In February, the Huskers play five of their seven games at PBA including four weekend home matchups. The first half of the month features home games against Penn State (Feb. 5) and Wisconsin (Feb. 11) as well as trips to Michigan (Feb. 8) and Rutgers

The Huskers will close the regular season at Iowa on Sunday, March 5, before heading to Chicago for the 2023 Big Ten Basketball Tournament.

Start times and television information for all of Nebraska’s 2022-23 games will be announced later this month.

Season tickets for the 2022-23 campaign are now on sale. Men’s packages start at $120 and feature 15 games, including all 10 Big Ten matchups. The home schedule features six NCAA Tournament teams, including defending Big Ten regular-season champions Wisconsin and Illinois and Big Ten Tournament champion Iowa. The season-ticket packages do not include the Dec. 20 Battle in the Vault event, but 2022-23 season ticket holders have an opportunity to purchase that ticket through Ticketmaster.

In addition, fans can now purchase the Six-game mini plan, which include 300 Level seats for any six games during the 2023-23 season for just $30 while supplies last. For more information on the Six-game mini plan  and 2022-23 season tickets, visit Huskers.com/Tickets or call the Nebraska Athletics Ticket Office at 800-8-BIGRED during business hours.