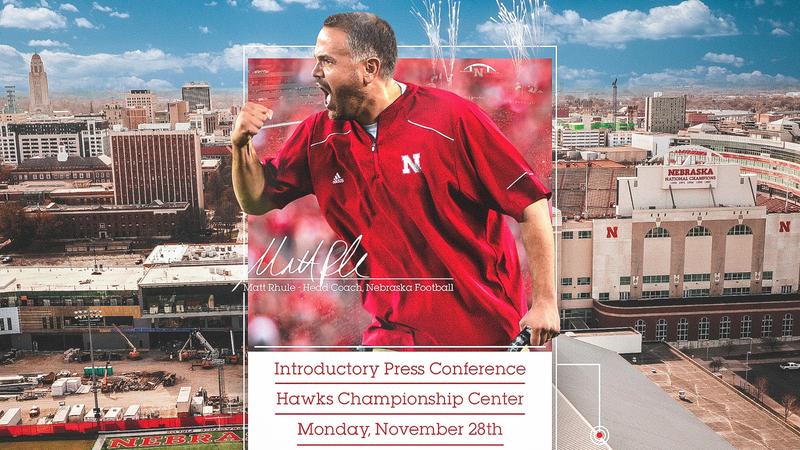 Husker Nation is encouraged to come to Memorial Stadium on Monday and welcome head football coach Matt Rhule to Nebraska prior to Rhule’s introductory press conference.

University of Nebraska students and the general public are invited to gather at Gate 20 on the East side of Memorial Stadium at 12:50 p.m. on Monday. That group will have the first chance to welcome Rhule before he makes his way to the 1:30 p.m. press conference inside the Hawks Championship Center. Fans will then be invited inside Memorial Stadium to watch the press conference live on the stadium big screen.

Fans coming to Memorial Stadium to greet Coach Rhule are advised that campus parking rules are in effect on Monday. Visitor parking is available in metered stalls on all four sides of the stadium but vehicles parked in a lot without a proper permit will be ticketed.

Those unable to make it to the stadium can follow all of the action live on Huskers.com and through Nebraska’s official social media channels. A live video stream will start at 12:30 p.m. with an hour of coverage leading up to the press conference led by Greg Sharpe, Jessica Coody and Damon Benning. The stream will carry the press conference in its entirety before wrapping up its coverage with final thoughts and comments and an exclusive interview with Coach Rhule after the press conference has ended.

Fans can watch the live stream for free by clicking on the play button on the image above or clicking on the link in the red box. The press conference will also be televised live on the Big Ten Network.