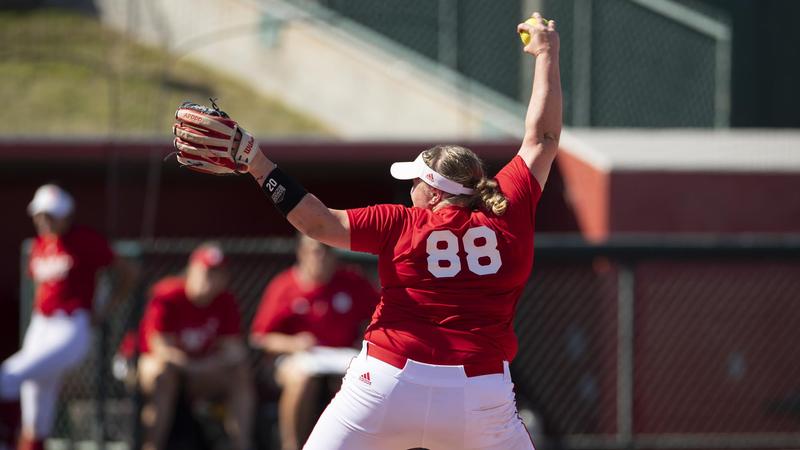 It was a defensive struggle for the Nebraska softball team in game one of Saturday’s doubleheader against Colorado State, as the Huskers committed four errors and allowed 10 unearned runs in a 10-5 loss at Bowlin Stadium.

While Nebraska’s defense struggled, the Husker offense managed only one hit despite scoring five runs. Danielle Serna tossed a one-hitter to earn the win for Colorado State, as Nebraska benefited from six walks, two hit batters, two CSU errors and a passed ball.

Although Nebraska’s defensive miscues extended several innings, the Rams capitalized with timely hits. Colorado State was limited to five hits in the game, but three of those hits were run-scoring, two-out, extra-base hits after a Nebraska error had extended the inning. Those timely hits included a two-run homer in the first, a two-run double in the fourth and a three-run homer in the fifth.

Colorado State grabbed a 3-0 lead in the top of the first. A leadoff walk came around to score following a stolen base and a dropped fly ball. The error also extended the inning, and Serna helped herself with a two-out, two-run homer to left center.

Nebraska answered by taking an advantage of a CSU error in the bottom of the first. A pair of walks to Billie Andrews and Sydney Gray put Huskers on first and second with one out. Then with two outs, Neal reached on an error to score Andrews and cut the Rams’ lead to 3-1.

Colorado State took advantage of another Husker error in the top of the fourth. An error extended the inning and with two outs, Jordan West grounded a two-run double down the left field line to stretch the lead to 5-1.

In the bottom of the fourth, Nebraska produced its first hit of the game and scored four runs to tie the game. The Huskers loaded the bases on walks to Neal and Brook Andrews to start the inning before Katelyn Caneda was hit by a one-out pitch. Talia Tokheim then brought Neal home with an RBI fielder’s choice that made it 5-2. A passed ball brought Andrews home with a second run of the inning, cutting the lead to two. The Huskers then tied the game when Courtney Wallace hit a fly ball to center that the center fielder lost in the sun, and the ball dropped for a two-run double.

After Nebraska tied the game, Colorado State responded in a big way with a five-run fifth inning, fueled by more Husker errors. A leadoff single, a dropped pop up on a bunt and a wild pitch put Rams on second and third with no outs. Nebraska then dropped a fly ball, allowing two runs to score. Then with two outs, Colorado State once again came up with a timely hit to make Nebraska pay for its defensive miscues. This time it was Hailey Smith, who lined a three-run homer over the right-field fence to give the Rams a 10-5 lead.

While Mangel kept Colorado State off the board to give Nebraska a chance over its final three at bats, the Huskers had only two base runners over the final three innings as Serna closed out her complete game.