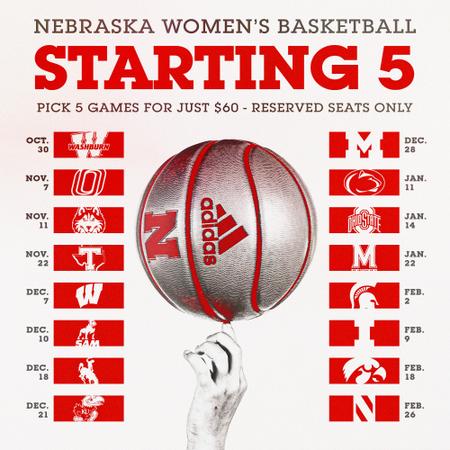 Husker women’s basketball fans are now able to build their own custom ticket package for the 2022-23 season with The Starting Five Pack on sale now.

With The Starting Five Pack, fans can get reserved seats for any five home games for just $60. Fans can select any of the Huskers’ 16 home games to customize their personal ticket package. To purchase, visit Huskers.com/Tickets or call 800-8-BIGRED during business hours.

The Huskers return the bulk of their lineup from a team that finished 24-9 and advanced to the NCAA Tournament in 2023. The returnees are led by 2022 Big Ten Freshman of the Year Alexis Markowski (Lincoln, Neb.) and All-Big Ten performers Isabelle Bourne (Canberra, Australia) and Jaz Shelley (Moe, Australia).

Nebraska will tip off its 2022-23 season with an exhibition home game against Washburn on Sunday, Oct. 30 at 1 p.m. NU’s 15-game regular-season home schedule will begin with Omaha at Pinnacle Bank Arena on Monday, Nov. 7 at Noon and will feature Nebraska’s Life Skills Sportsmanship Pep Rally for middle-grades youth across the state.

Fans can get their first look at the 2022-23 Huskers this Friday as part of Opening Night with Husker Hoops. The event, which starts at 7 p.m., will feature a scrimmage by the Husker women. Fans can reserve their free tickets by visiting Huskers.com/Tickets.