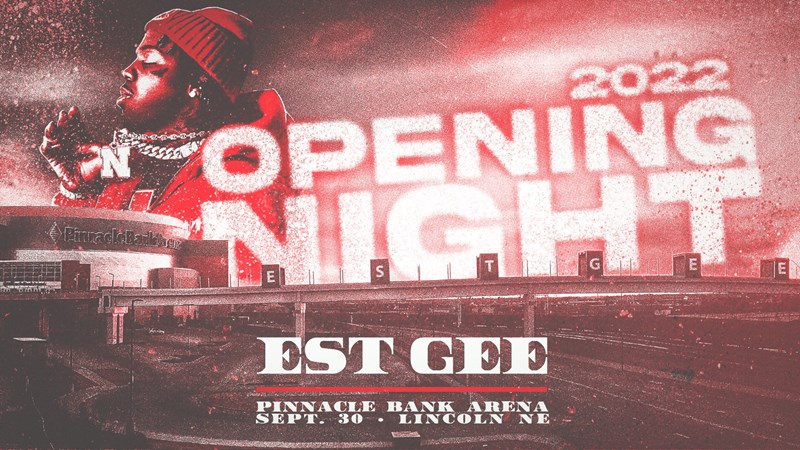 Lincoln – Basketball fans will get their first look at the 2022-23 Nebraska men’s and women’s basketball teams and get a special performance from rising rap star EST Gee as part of 2022 Opening Night with Husker Hoops.

Opening Night with Husker Hoops will take place on Friday, Sept. 30, and will feature introductions and scrimmages from both teams, remarks from Head Coaches Fred Hoiberg and Amy Williams, contests with members of both programs and more.  The event will begin at 7 p.m. with PBA doors opening at 6 p.m.  The event is free, but fans are encouraged to register for their free tickets in advance.

“We are excited to have Opening Night for Husker Hoops return this fall,” Nebraska Men’s Basketball Coach Fred Hoiberg said. “This group has worked hard throughout the summer, and I think they are excited to showcase their skills and interact with our fans. For many of our players, this will be their first gameday experience inside PBA, and I know they are looking forward to the event and putting on a good show.”

“Opening Night with Husker Hoops has become an event that our team really looks forward to each year,” said Nebraska Women’s Basketball Coach Amy Williams. “It is exciting for us to get back into Pinnacle Bank Arena with the best fans in the country.  Husker men’s and women’s basketball teams will be fun to watch this year, and we hope everyone takes advantage of this opportunity to get a sneak peek.”

Fans can start registering for tickets on Huskers.com/Tickets beginning on Tuesday, Aug. 30, at 10 a.m.   There is a limit of four tickets per person. In addition, a limited number of premium student seats will be held for 2022-23 RedZone season-ticket holders, and information on how to reserve tickets for the event will be communicated directly to student season-ticket holders.

The Husker men return two of their top four scorers from a year ago, including super senior Derrick Walker and sophomore C.J. Wilcher along with Keisei Tominaga, who started 11 games in 2021-22. In addition, the Huskers added a trio of Division I transfers in North Dakota State transfer and Lincoln native Sam Griesel, Emmanuel Bandoumel (SMU) and Juwan Gary (Alabama) along with a recruiting class that ranked in the top 30 nationally by both Rivals and 247Sports.

The Husker women return five starters from a team that finished 24-9 last season and advanced to the 2022 NCAA Tournament. The group is led by 2022 Big Ten Freshman of the Year Alexis Markowski, All-Big Ten forward Isabelle Bourne and All-Big Ten guards Jaz Shelley and Sam Haiby and sophomore Allison Weidner. NU also adds Omaha native and South Dakota transfer Maddie Krull, a two-year starter from a team that went to the NCAA Sweet 16 in 2022.

Men’s packages start at $120 and feature 15 games, including all 10 Big Ten matchups. The schedule features six NCAA Tournament teams, including defending Big Ten regular-season champions Wisconsin and Illinois. The season-ticket packages do not include the Dec. 20 Battle in the Vault event, but 2022-23 season ticket holders have an opportunity to purchase that ticket during an exclusive presale period through Ticketmaster.

Women’s season-ticket GA packages are $80 for adults and $48 for youth/seniors for the 16-game home schedule, including marquee matchups with Iowa, Maryland, Michigan, Kansas and Ohio State. For more information on purchasing season tickets, visit Huskers.com/Tickets or call the Nebraska Athletics Ticket Office at 800-8-BIGRED during business hours (8 a.m.-5 p.m., central).