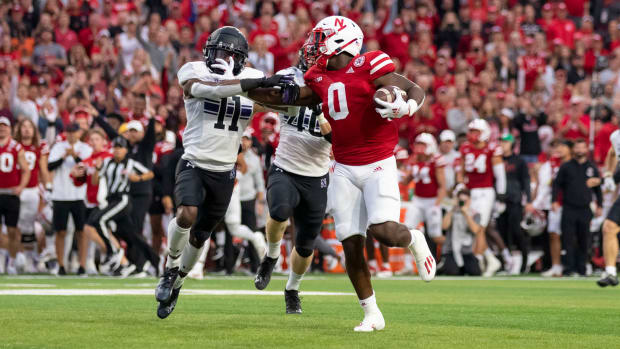 College football fans know that each year most every college football team plays a 12-game schedule (excluding postseason play). Fans also know there are four quarters in each football game. In a stunning flash of genius (!), I’ve decided to review the 2022 Husker football schedule in four segments – hence the four quarters reference.

Game #1: Northwestern Wildcats (aka ‘The Duel in Dublin’)

Nebraska has to travel 4,047 miles to play a team that is just 530 miles from Lincoln. If that makes sense to you, please email me with the reasons you feel that way.

Last year’s 56-7 win in Lincoln over the Wildcats should mean little for this game. Last year’s blowout by the Huskers may be just an aberration. Why? Because Pat Fitzgerald can coach. He’s done it for the past 16 years at Northwestern. Over the last five years his teams have gone 10-3, 9-5, 3-9, 7-2 and 3-9. NW has beaten Nebraska three out of the past five seasons. Last year, NW struggled all year on both sides of the ball. Will Fitzgerald have back-to-back losing seasons? Don’t bet on it. If Nebraska overlooks the Wildcats, they will do so at their own peril.

The biggest challenge for the Huskers coming into this game may be the jet lag (six-hour difference) the Huskers might suffer after playing in Dublin the week before. But the risk of jet lag to a 20-something year old football player shouldn’t be too much of a problem.

Note: The Hawks have a couple of players from Nebraska on their roster: linebackers Marcus Vaughn-Jones from Omaha Creighton Prep and Kason Kelley from Millard North.

Suggestion: For a very long time, North Dakota was known as the Fighting Sioux. That mascot name was changed in 2015 because it was deemed to be offensive. Be that as it may, I had a solution that would have helped keep the name in place (sorta) and would be politically correct.

Nebraska had an awesome defensive tackle who was so great, he finished near the top in the 2009 Heisman race. His name? Ndamukong Suh. All North Dakota had to do was to get Suh’s permission to use his name and voila! ND would still be called “The Fighting Suh”! Brilliant idea, no?

The Eagles (not to be confused with the rock group) finished last year with a 3-9 record – same as Nebraska’s. But last year, the Huskers were going toe-to-toe with the likes of Oklahoma, Michigan, Michigan State, Wisconsin and Iowa while the GS Eagles faced their Sun Belt Conference foes. To the Eagles’ credit, though, they did play nonconference games with Arkansas and BYU, losing to both. Other Sun Belt teams include Marshall and Appalachian State – both of which are ranked ahead of Nebraska in 2022.

This year, Georgia Southern will come to Lincoln with a quarterback who knows what it’s like to play in Memorial Stadium. Kyle Vantrease played last year when his Buffalo Bulls team lost Nebraska 28-3. Vantrease didn’t have a spectacular passing day (27-50-1 for 224 yards). But the Buffalo transfer will bring some much-needed experience when his Eagle team, led by former USC coach Clay Helton, comes to Lincoln in September.

Next week we’ll look at Oklahoma, Indiana and Rutgers.

Running back Markese Stepp (’21 transfer from USC) has decided to leave the Husker football program. Stepp joins a long list of Husker running backs who have made early exits in the past four years. Late last year, the Huskers lost two RBs: Sevion Morrison and Marvin Scott III. For whatever reason, there has been a revolving door of running backs.

How ’Bout Them Huskers

This week’s podcast features an interview grandson Will and I did with former Husker O-lineman Russ Hochstein (pronounced HOKE-styne). Russ talks about how and why he decided to play for Nebraska and what he had to go through to get drafted by the NFL. Hochstein played at Nebraska from 1997-2000. He got a national championship ring in ’97 at Nebraska and two Super Bowl rings when he was with the New England Patriots. Please don’t miss this episode!