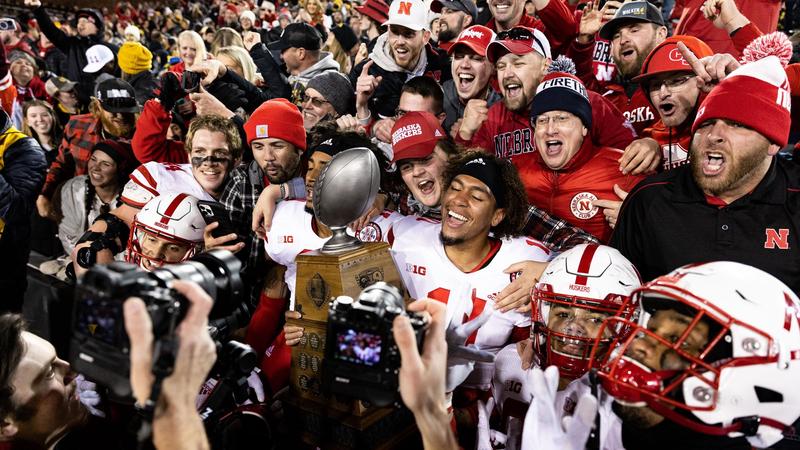 Iowa City, Iowa – Nebraska jumped to a 24-0 lead and held on for a 24-17 victory over Iowa to reclaim the Heroes Trophy at Kinnick Stadium on Friday.

Nebraska’s defense was dominant for the first 30 minutes against the Hawkeyes, pitching a first-half shutout for the third time in the last four games (Minnesota, Wisconsin). The defense did not allow Iowa to crack the scoreboard until midway through the third quarter, as the Big Red took a 24-7 lead to the fourth quarter.

Iowa rallied for 10 points midway through the fourth and had two chances to drive for a score against the defense, but the Huskers shut down those drives without threats and capped the victory with Chris Kolarevic’s interception in the final minute. It was the fourth turnover gained by the Huskers on the day, turning the tables on the recent history of the series with the Hawkeyes.

Nebraska closed the day with 329 total yards against the Iowa defense, while the Huskers held the Hawkeyes to 274 total yards, including 150 passing and 124 rushing yards. Rahmir Johnson led the Big Red ground game with 52 yards on 12 carries, while Kaleb Johnson led Iowa with 109 yards and Iowa’s first touchdown on 16 totes.

The Huskers jumped on the Hawkeyes early, as Thompson hit Palmer with an 87-yard touchdown strike just 6:15 into the game to give the Big Red a 7-0 lead.

Nebraska’s defense then forced a turnover on Iowa’s ensuing drive, as Quinton Newsome sacked Iowa quarterback Spencer Petras for a 10-yard loss and forced a fumble recovered by Ernest Hausmann at the Iowa 31. Petras did not return after the play.

Nebraska drove to the Hawkeye 3-yard line before the Hawkeyes held, and Timmy Bleekrode put the Huskers up 10-0 with a 21-yard field goal with 3:24 left in the opening quarter.

The Huskers took the 10-0 lead to the second quarter before Thompson found Palmer again, this time from 18 yards out to put the Big Red up 17-0. Nebraska’s second touchdown was set up by reserve quarterback Alex Padilla’s fumble after he was sacked by Husker linebacker Eteva Mauga-Clements. Garrett Nelson recovered the fumble and was credited with a 14-yard return to set the offense up at the Iowa 39. Three plays later, Thompson and Palmer converted the turnover into a touchdown.

Nebraska threatened to score late in the first half but took the 17-0 lead to halftime.

The Big Red opened the second half with the ball but the drive stalled at Nebraska’s 43. Brian Buschini booted a high, 37-yard punt that was muffed by Arland Bruce IV. The fumble was recovered by Alante Brown, setting up the Huskers with another short field, this time at the Iowa 18. Three plays later, Thompson found Washington streaking across the middle into the end zone to give Nebraska a 24-0 lead less than three minutes into the third quarter.

Iowa finally found an offensive answer with a seven-play, 75-yard drive capped by Johnson’s 44-yard touchdown run with 8:32 left in the third. The score cut Nebraska’s lead to 24-7, but the Husker defense continued to silence Iowa for the next quarter.

Nebraska maintained possession on several drives but was unable to produce points, and Iowa found another answer with Padilla’s 14-yard touchdown pass to Luke Lachey with 6:49 left in the game. The scored capped a nine-play, 90-yard Iowa drive and cut NU’s margin to 24-14.

The Huskers made a costly miscue on the ensuing drive, as Johnson was stripped of the ball on his way to the ground after a short gain. The ball never hit the ground, and Johnson’s forward progress was initially ruled stopped before an official review of the play. But no whistle was blown on the play, and a clear recovery was ruled in favor of the Hawkeyes.

Nebraska’s defense refused to bend, despite a drive start for the Hawkeyes at the NU 27. Iowa gained no yards on the drive but Drew Stevens’ 45-yard field goal snuck inside the right upright to cut the Husker margin to just a touchdown at 24-17 with 5:41 left.

On its final two drives, Iowa managed just 13 yards on 11 plays, before Kolarevic’s game-sealing interception at the Iowa 36-yard line with 42 seconds left.

Nebraska closed its season with a 4-8 record (3-6 Big Ten), while Iowa slipped to 7-5 (5-4 Big Ten). The Huskers claimed the Heroes Trophy for the first time since 2014, snapping Iowa’s seven-game winning streak in the series.