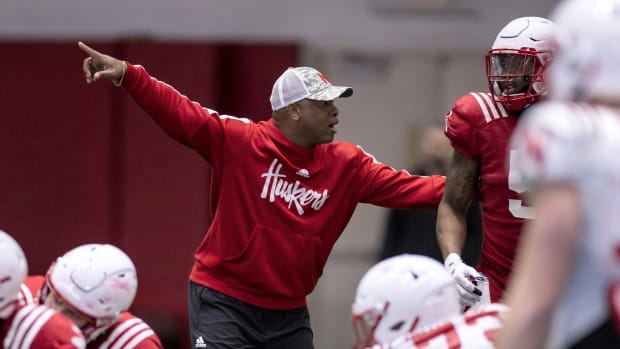 Despite adding Palmer and Garcia-Castaneda prior to spring ball, the Huskers kept their eyes open for another receiver. The strategy shifted a bit from luxury to necessity, though, after Zavier Betts decided to leave the team in late March.

Marcus Washington entered the transfer portal right at the May 1 deadline to retain eligibility this season. Despite being in the mix with Texas’ top wide receivers during spring practice, Washington decided to look for another opportunity.

The 6-foot-2, 190-pound Washington was a consensus four-star recruit out of Trinity Catholic (Mo.) High School in the 2019 class. He was ranked as high as the No. 105 overall recruit by Rivals and played in the prestigious Under Armour All-American Game. He collected nearly 40 offers and chose Texas over Ohio State and Nebraska, while also holding notable offers from Alabama, Auburn, Florida, Florida State, Georgia, Michigan, Ole Miss, Notre Dame, Oklahoma, Oregon, Penn State, South Carolina, Tennessee and USC, among many others.

Washington played sparingly during his first two seasons in Austin, although he did see action in 19 games with one start. It wasn’t until this past season, however, that he made a significant contribution. In 12 games last fall, including seven starts, he had 18 receptions for 277 yards and two touchdowns.

Nebraska became a logical destination when Marcus decided to transfer from Texas. The obvious connection was his relationship with quarterback Casey Thompson, who had transferred from Texas to Nebraska over the winter. The pair practiced together for three years and shared prominent playing time together last season.

Washington also had a history with Mickey Joseph, who recruited him in high school when Joseph was at LSU.

A deeper dive reveals that Marcus’ father, Nu-Nu Washington, grew up on the north side of St. Louis, one door down from a cousin of former Husker defensive back Kenny Wilhite, Nebraska’s director of high school relations. The two grew up friends, and that connection and trust played a big part as well.

The Huskers brought Marcus in for an official visit the weekend of May 20-22, but it wasn’t his first time in Lincoln. He was an early target of former wide receivers coach Keith Williams and visited campus for a Friday Night Lights camp back when Mike Riley was head coach. When Frost was hired, Troy Walters prioritized Washington and got him to take an official visit to Lincoln in September 2018.

On May 24, Washington announced on Twitter his intention to transfer to Nebraska over fellow finalists Purdue and Utah.

While at Texas, Washington showed the ability to play multiple receiver positions. According to Pro Football Focus, last season he played 244 snaps at wideout and 188 snaps in the slot. That versatility should help him get plenty of reps for the Huskers. Like Palmer and Garcia-Castaneda, Washington has two years of eligibility remaining, plus a potential redshirt season if needed.