Huskers to Visit Colorado for Charity Exhibition this October 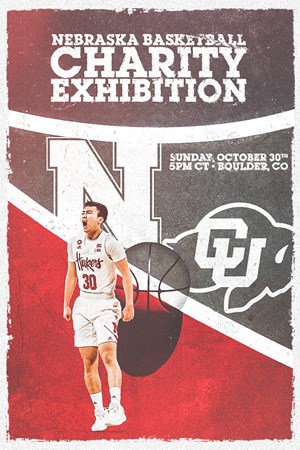 The Nebraska men’s basketball program will travel to Colorado for a charity exhibition with the Buffaloes on Sunday, Oct. 30. Ticket proceeds from the matchup will go to survivors and first responders of last December’s Marshall Fires in Boulder County.

Tipoff is set for 5 p.m. (central) from the CU Events Center in Boulder. Tickets are $20 for chairback seating and $15 for bench seating. Ticket proceeds from the game will go directly to the Boulder County Wildfire Fund which is being distributed through Boulder County’s Navigating Disaster for Boulder County program. Tickets will go on-sale to the general public on Monday, Sept. 26.

“We were able to help several local charities with our exhibition with Colorado last season, and we are honored to make the return trip to help people in the Boulder community affected by the last year’s Marshall Fires,” Nebraska Coach Fred Hoiberg said. “Coach Boyle’s teams are always well coached and disciplined, and it will provide our team with a good test in what is one of the toughest environments in the Pac-12. More importantly, the ticket proceeds of this game will directly benefit the people who are still dealing with the aftermath of the fires.”

“While the challenging recovery process continues, our friends and neighbors impacted by the Marshall Fire still need our help,” Colorado head men’s basketball coach Tad Boyle said. “That’s why I’m proud that we can host this exhibition that will help provide necessary recovery services, and a fun evening of basketball, for so many that are still in need. I encourage our community to come out and show their continued support for this important, and ongoing, recovery effort.”

The two long-time rivals met in a charity exhibition game last season at Nebraska, with the Cornhuskers taking an 82-67 decision in a contest that benefited several Lincoln-area organizations affected by COVID-19.

Nebraska returns two of its top four scorers for Hoiberg, who begins his fourth season at Nebraska. Senior forward Derrick Walker (9.5 ppg, 6.0 rpg) has started 48 straight games for the Huskers, while sophomore guard C.J. Wilcher (8.1 ppg, 2.3 rpg, 52 3-pointers) was the Huskers’ sixth man for most of the 2021-22 season.  NU has retooled its roster with a trio of Division I transfers in Emmanuel Bandoumel (SMU), Juwan Gary (Alabama) and Sam Griesel (North Dakota State) and a recruiting class that ranked in the top 30 nationally by both Rivals and 247Sports. That group includes a pair of top-150 recruits in Ramel Lloyd Jr. and Jamarques Lawrence as well as junior college transfer Blaise Keita, who is the No. 4 overall player by JUCORecruiting.com.

Season tickets for the 2022-23 campaign are now on sale. Men’s packages start at $120 and feature 15 games, including all 10 Big Ten matchups. The home schedule features six NCAA Tournament teams, including defending Big Ten regular-season champions Wisconsin and Illinois and Big Ten Tournament champion Iowa. The season-ticket packages do not include the Dec. 20 Battle in the Vault event, but 2022-23 season ticket holders have an opportunity to purchase that ticket through Ticketmaster.