Huskers to Face Hokies in ACC/B1G 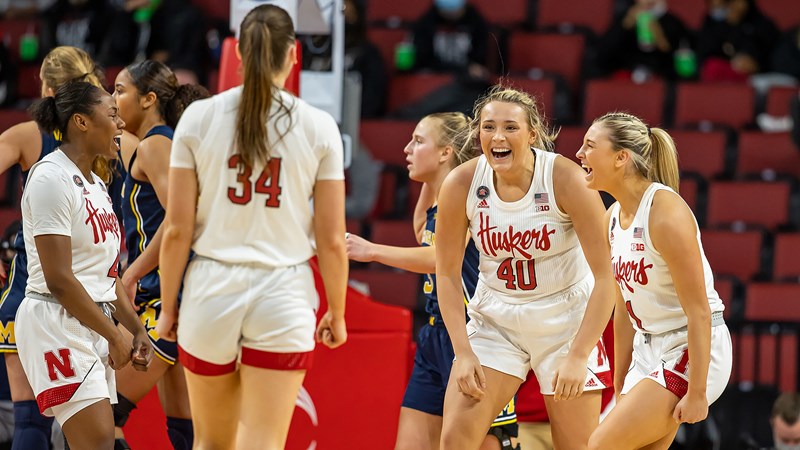 Lincoln – The Nebraska women’s basketball team will travel to Virginia Tech for the second time in seven seasons to battle the Hokies in the ACC/Big Ten Challenge on Thursday, Dec. 1. The official announcement of the opponents and dates of all 14 games in the 2022 ACC/Big Ten Challenge came from the conferences on Monday, July 11.

The Huskers (24-9) and Hokies (23-10) are both coming off NCAA Tournament appearances in 2022. Nebraska finished sixth in the final regular-season Big Ten standings with an 11-7 league mark before advancing to the Big Ten Tournament semifinals in Indianapolis. Virginia Tech tied for third in the ACC with North Carolina and Notre Dame after battling its way to a 13-5 conference mark a year ago. The Hokies fell in the ACC semifinals to No. 3 NC State.

Nebraska’s clash with Virginia Tech will mark the second all-time meeting between the two programs in women’s basketball and both have come on the the road in the ACC/Big Ten Challenge. The Hokies defeated the Huskers, 76-67 on Thursday, Dec. 1, 2016 at Cassell Coliseum in Blacksburg, Va., in Coach Amy Williams‘ first season leading the Huskers. That was also the first season at Virginia Tech for Hokies head coach Kenny Brooks.

Nebraska returns five starters from its 2021-22 team, including All-Big Ten honorees Alexis Markowski, Jaz Shelley, Sam Haiby and Isabelle Bourne. Markowski, the 2022 Big Ten Freshman of the Year, is back after averaging 12.8 points and 8.0 rebounds in her first season on the block with the Big Red.

She will have her hands full with Virginia Tech senior Elizabeth Kitley. The 6-6 center led the Hokies with 18.1 points, 9.8 rebounds and 2.4 blocks per game a year ago, including a massive 42-point eruption in an NCAA Tournament loss to nationally ranked Florida Gulf Coast in the first round. The 2022 All-American and ACC Player of the Year, Kitley is a two-time first-team All-ACC center and a two-time Lisa Leslie Award finalist.

The match-up between the Huskers and Hokies also will feature a pair of outstanding point guards. Jaz Shelley (Moe, Australia) led Nebraska in scoring (13.1 ppg), assists (5.0 apg) and steals (1.8 spg) while ranking second on the team in rebounds (6.3 rpg) in her first season as a Husker. She earned second-team All-Big Ten honors and a spot on the Big Ten All-Defensive Team. Shelley drained 40.6 percent (82-202) of her three-point attempts on the year.

Hokies point guard Georgia Amoore (Victoria, Australia) ranked third on the team in scoring (11.2 ppg) while leading Virginia Tech with 4.4 assists per game. Amoore knocked down a team-best 40 percent (70-175) of her three-point attempts.

Last season, Nebraska rolled to an 86-60 win over 2021 NCAA Tournament qualifier Wake Forest in Winston-Salem, N.C., on Dec. 1. It was the second straight win for the Huskers in the Challenge, following an 83-79 win over Duke on Dec. 4, 2019, in NU’s most recent Challenge home game at Pinnacle Bank Arena.

Nebraska’s ACC/Big Ten Challenge game with Virginia Tech is the first announced game of the 2022-23 season for the Huskers. Dates for other non-conference games for the Big Red’s 2022-23 season will be released in the coming days before the announcement of tentative dates for Nebraska’s Big Ten Conference schedule are released by the league in August. Fans interested in joining Nebraska’s season ticket wait list can sign up now on Huskers.com. Applications submitted before Aug. 1 provide fans priority access to 2022-23 season tickets.