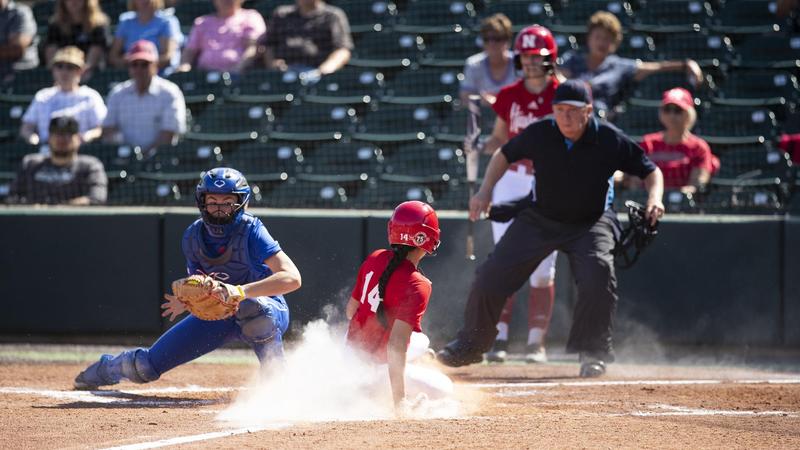 The Huskers took on the Jayhawks in a doubleheader on Sunday afternoon, claiming victories in both games. Nebraska claimed game one 5-4 and then finished the day with an 11-1 victory in game two.

In game one, NU took an early 4-0 lead in the bottom of the third inning. Katelyn Caneda led off with a single and advanced to second after a ground out from Ava Bredwell. Billie Andrews doubled, scoring Caneda. Courtney Wallace singled and Billie Andrews advanced to third. Sydney Gray added another single to the inning, scoring Andrews and advancing Wallace to second. Mya Felder hit a ground out, advancing the runners to second and third. Caitlynn Neal added another single, scoring Wallace and Gray. The Huskers took the 4-0 lead into the top of the fourth inning.

The Big Red added another run in the bottom of the fifth. With one out, Wallace reached on an error and advanced to second after a single from Gray. With two outs, Neal singled to center field, scoring Wallace to make it 5-0.

The Jayhawks rallied in the top of the fourth inning. Lyric Moore led off with a double. Sara Rozsak singled, scoring Moore. With two outs, Addison Purvis was hit by a pitch, putting runners at first and second. Shayna Espy singled up the middle, scoring Roszak. Aynslee Linduff doubled to center field, scoring two.

However, the Huskers were able to hold off the Jayhawks, claiming the game one victory, 5-4.

In game two, NU got off to an early lead, scoring four in the first inning. Billie Andrews reached base to lead off after an error by KU’s shortstop. Gray was walked to put runners on first and second. Felder singled to right field, scoring Andrews. A sacrifice fly from Neal, scored Gray while a homer from Brooke Andrews added two more runs to put the Huskers ahead, 4-0.

In the bottom of the second inning, the Huskers added another run. With two outs, Billie Andrews was walked. A single from Wallace advanced Andrews to third. Andrews went on to steal home, extending NU’s lead to 5-0.

The Huskers added two more runs in the bottom of the fourth inning. With one out, Kaylin Kinney doubled to left field and then advanced to third on a passed ball. Caneda was walked. Kinney scored and Caneda advanced to third on a wild pitch. Billie Andrews hit a sacrifice fly to score Caneda, making it 7-0 heading into the top of the fifth inning.

Caitlynn Neal smashed a two-run homer in the bottom of the fifth to extend the lead. Brooke Andrews followed with a solo homer over the right center field to make it 10-0.

NU added another run in the bottom of the sixth. With two outs, Alina Felix walked. Felder doubled to left center, scoring Felix, extending the lead to 11-0.

The Jayhawks added one in the top of the seventh. With one out, Sophia Buzard singled, stealing second and advancing to third on a passed ball. Olivia Bruno doubled to left field, scoring Buzard, but it was not enough, and Nebraska claimed game two, 11-1.

Nebraska returns to action next weekend for the Big Red Fall Classic. NU will face Colorado State in a doubleheader on Saturday, Oct. 8 starting at 12:30. On Sunday, the Huskers will face UNO at 10 a.m. and CSU at 3:30 p.m. Admission is free to the public.