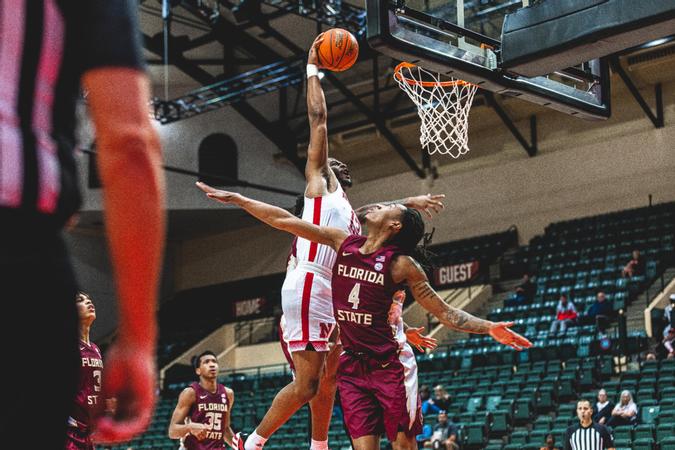 Derrick Walker had career highs of 20 points and 13 rebounds to lead Nebraska to a 75-58 win over Florida State in the ESPN Events Invitational Sunday night.

Keisei Tominaga, C.J. WIlcher and Sam Griesel added 13 points apiece, as Nebraska shot 50 percent from the floor and dished out a season-high 22 assists. Griesel had a season-best nine assists and scored nine of his 11 second-half points in a decisive 13-2 run that pushed a 37-32 lead into a 16-point advantage.

Leading 37-32, Walker’s dunk ignited the run before Griesel had a four-point play and a 3-pointer in back-to-back possessions, as NU stretched the lead to 50-34. The Huskers built a 19-point lead before the Seminoles (1-6) made one last run, stringing together nine straight points to pull with 59-49 after a 3-pointer from Cam’Ron Fletcher with just under eight minutes remaining.

That would be as close as Florida State would get, as Juwan Gary’s baseline dunk started a 12-2 surge that stretched the lead to 71-51 after a Walker basket with 3:39 left and cruised to an 18-point margin.

In the first half, Nebraska took control in the final five minutes to take a 33-26 lead into the break. NU had balanced scoring with Tominaga coming off the bench for nine points while Walker and Wilcher added eight apiece for the Huskers.

Nebraska trailed 15-9 with just over 13 minutes left in the half before Walker and Tominaga combined for eight points in a 10-0 spurt to give the Huskers a 19-15 lead after a Tominaga jumper. NU held the Seminoles scoreless for nearly five minutes in the stretch. Florida State fought back and took a 24-21 lead on Matthew Cleveland’s basket with 5:26 left, but Nebraska would respond. A Wilcher 3-pointer started a 12-2 spurt over the final 5:14 of the half as Juwan Gary’s steal and layup put NU up 33-26. NU held FSU to 1-of-5 shooting and forced seven of the Seminoles’ 14 first-half turnovers in the final 5:14 of the half.

Cleveland led Florida State with 17 points, as the shot 39 percent and committed 19 turnovers which led to 17 Husker points.

The Huskers return home on Wednesday to take on Boston College in the ACC/Big ten Challenge. Tipoff is set for 8:15 p.m., and tickets are available by visiting Huskers.com/Tickets.

Postgame Notes
*-Derrick Walker posted his second straight double-double with 20 points and 13 rebounds on Sunday. It was his fifth career double-double and fourth of the season for a Husker.
*-Walker’s 20 points is a career high, as his previous best was 16 on three occasions most recently against Northwestern in the Big Ten Tournament
*-Walker’s career-high tying 13 rebounds marked the sixth time in seven games NU has had a player grab at least 10 rebounds. Walker also 13 in NU’s four-overtime game at NC State last season.
*-Walker is the sixth different Husker to lead NU in scoring in the first seven games
*-Sam Griesel’s nine assists is a season high as the Huskers had 22 assists on 33 baskets. Nebraska’s 22 assists was NU’s most since having 25 against Doane in 2020-21, and most vs. a Division I opponent since having 22 against Purdue in the 2019-20 season
*-Nebraska put a season-high five players in double figures
*-Juwan Gary tied a career high with three steals, the fifth time in his career with three steals
*-Keisei Tominaga had 13 points off the bench, marking his fourth double-figure scoring effort of the season off the bench.
*-Nebraska shot 50 percent, including 55 percent in the second half. NU had 11 of its 14 turnovers in the first half and ended up leading points off turnovers by a 17-9 margin.
*-Nebraska improves to 16-19 all-time against current members of the ACC, including 2-1 against Florida State. All three meetings between Nebraska and Florida State have taken place in the state of Florida, as the teams met previously in Sunrise (2005-06) and Tallahassee (2014-15)
*-Derrick Walker made his 50th career start as a Husker against Florida State tonight.