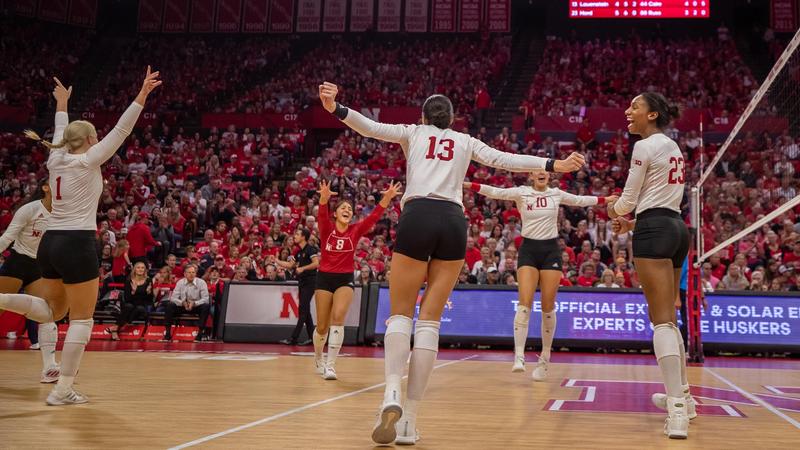 The Nebraska volleyball team was selected as the No. 7 overall seed for the NCAA Tournament Sunday night and will host the NCAA first and second rounds at the Bob Devaney Sports Center this Thursday and Friday.

The Huskers, making their 41st straight NCAA Tournament appearance and hosting the first round for the 37th time, will open the tournament on Thursday, Dec. 1 at 7 p.m. against Delaware State (24-6), champions of the Mid-Eastern Athletic Conference. The 4:30 p.m. match will feature Kansas (18-10) of the Big 12 Conference and Miami (19-10) of the Atlantic Coast Conference. Thursday’s winners will meet in the second round on Friday, Dec. 2 at 7 p.m.

Texas, Louisville, Wisconsin and Stanford received the top four seeds. Should those teams all advance past the second round, they would host an NCAA Regional on Dec. 8-10. Nebraska is in the same region as No. 2 Louisville, along with No. 10 national seed Oregon and No. 15 Baylor. The Huskers would have an opportunity to host an NCAA Regional only if they advance past the opening two rounds and Louisville is upset in the first or second round.

Tickets to the first and second rounds in Lincoln are available for purchase online at Huskers.com/tickets as of Sunday night. Streaming and broadcast information will be announced in the coming days.

The Huskers, who finished the regular season at 24-5 overall, took second in the Big Ten Conference this season with a 16-4 record. Nebraska holds a nation-leading streak of 10 straight NCAA Regional Final appearances and has won five national championships (1995, 2000, 2006, 2015 and 2017). NU also ranks second in NCAA history in postseason wins (124-35) and winning percentage (.778) over 40 previous tournament appearances.

The 2022 Husker squad looks to return to the NCAA Semifinals for the 17th time in program history and second year in a row after finishing as runner-up last year to Wisconsin in Columbus, Ohio. This year’s NCAA Championship is set for December 15-17 at the CHI Health Center in Omaha. The city of Omaha has served as the most frequent host of the NCAA Championship in the 41-year history of the tournament. Omaha has hosted the event four times: 2006, 2008, 2015 and 2020. The Huskers won NCAA titles in Omaha in both 2006 (vs. Stanford) and 2015 (vs. Texas), and the Big Red reached the final four in 2008 before losing a five-set thriller to Penn State in the semifinals.