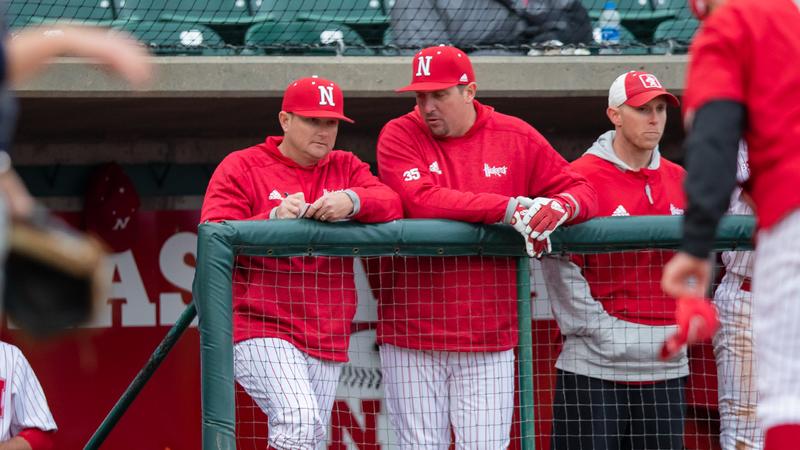 Head coach Will Bolt announced Thursday the signing of nine student-athletes to make up the Nebraska baseball program’s 2023 signing class.

“Having a sound recruiting plan starts with making sure you evaluate the guys that are going to be a great fit from a talent and makeup standpoint for your program,” said Bolt. “I’m excited about the character and talent level of this class. These guys are talented gamers who can help set the tone of what Nebraska baseball is all about. Coach Harvell and Coach Christy have done a great job in finding guys that can help elevate our program to the next level. Not only will these guys help us on the diamond, but they will be great in the classroom and community as well, bringing winning habits to the program each and every day.”

MAX BUETTENBACK
INF – 6-1 – 205 – L/R – Lincoln, Neb. (Lincoln Southeast High School)
Buettenback, ranked the No. 2 infielder in Nebraska by Prep Baseball Report and Perfect Game, has lettered three years under coach Montana Jones at Lincoln Southeast High School. As a junior, Buettenback was an all-conference and Super State selection and helped the Knights win the district championship. He hit .436 with 15 doubles, two triples, a home run, 16 RBI and 45 runs as a junior after hitting .452 with six doubles, a triple and three homers as a sophomore. A two-sport athlete, Buettenback earned all-conference recognition as a sophomore and junior in football.

Buettenback also played for JC Brager and the Nebraska Prospects, seeing time as an outfielder, pitcher and third baseman.

“Max is a versatile athlete who has played all over the field,” said Harvell. “He is a left-handed hitter that can flat out rake, which has landed him the seventh-ranked player in the state and a top-500 player in the country. Over the past year, he has dedicated himself in the weight room and is up over 200 pounds and still running extremely well, and as Coach Childress would say, ‘he’s tougher than a woodpecker’s lips.’ Max plays a gritty, aggressive brand of baseball that Husker fans should be as excited about as we are.”

Ranked the No. 3 shortstop and the No. 34 overall player in Illinois by Prep Baseball Report, Correa is a two-year letterwinner for coach Keron Walker at De La Salle Institute. Correa earned all-conference recognition in his sophomore and junior seasons. He helped the Meteors to back-to-back regional titles and clinched the sectional championship in his junior season. As a junior, Correa hit .475 with 11 doubles, three triples and 28 RBI.

Correa has also played for coach Matt Plante as a shortstop and second baseman with the Top Tier Americans and Top Tier Roos.

“Jaden is a very confident and athletic kid with wiry strength in the bat,” added Harvell. “His tools defensively are off the charts. He is a smooth defender at shortstop and has the arm strength to stick on the left side of the infield at the college level. Jaden is currently the third-ranked shortstop in Illinois and a top-500 player nationally, and for good reason. He was one of the top performers at the 2021 PBR Future Games with several flashy plays at shortstop, and he hit for power off the best high school pitchers in the country.”

Ranked one of the top 10 prospects out of Ontario according to Prep Baseball Report, Evans is a member of the Canadian Junior National Team and a two-sport athlete in baseball and volleyball at Glendale High School.

Evans hails from the same Great Lakes Canadians program as current NU pitcher Caleb Clark and has been coached by former Husker standout Adam Stern. He helped his team clinch titles at the CPBL championships, ABC Freedom Classic championships and ABC Invite championships in back-to-back seasons. Earlier this summer, Evans was selected to compete among the top 150 players in the country at the Canadian Futures Showcase held by the Toronto Blue Jays Baseball Academy.

“Matt is a guy who we fell in love with because of his speed and defense,” said Harvell. “He’s a 6.6 runner who hits from the left side and can really run it down in center field. He’s put on some weight and added some strength, which is allowing him to drive the ball out of the ballpark with regularity. Former Husker Adam Stern has been his coach throughout high school, and he was a member of the Canadian Junior National Team, so he already has a great understanding of how to play the game and has shown the ability to play it at a high level against elite competition.”

Harrahill, ranked the top pitcher in Nebraska by Perfect Game and Prep Baseball Report and the No. 2 overall player in the state according to Prep Baseball Report, has lettered two years under coach Anthony Dunn at Elkhorn North High School. An all-state selection as a junior, Harrahill went 8-2 with a 1.12 ERA and 92 strikeouts in 56 innings to lead the Wolves to a state championship. As a sophomore, he was an all-conference honoree in baseball and basketball and helped Elkhorn North to a district runner-up finish on the diamond.

Harrahill has also played for the Nebraska Prospects.

“First and foremost, Ryan is a winner,” stated Christy. “He led Elkhorn North to a state championship last year and is a physical kid that has an easy and repeatable delivery. The ball jumps out of his hand with minimal effort and he’s got quality secondary pitches to put hitters away, which profiles him as a starting pitcher with electric stuff. We are very excited Ryan is a Husker and believe he has a bright future ahead in Lincoln.”

Jasa has lettered three years under coach Jim Polson at Faith Christian High School and is also a two-year letterwinner in basketball. As a junior, Jasa earned all-state honorable mention in baseball and was a first-team all-metro honoree in basketball. With the Eagles, he owns a 5.42 career ERA with 64 strikeouts in 41.1 innings of action at the varsity level.

“At about 6-8, Carson has grown a lot over the past year,” added Christy. “He has made a big jump in his velocity as well, sitting in the low 90’s and even reaching 95. Carson has started to understand how his body moves and has shown the ability to have power stuff. He has a high ceiling, and it’s not every day you are able to sign arm talent like his this late in the recruiting process. We are thrilled Carson chose to wear Husker red.”

Madsen has played one season of baseball at the varsity level at Woodcreek High School under coach Lucas Conn. Madsen went 3-2 with a 1.99 ERA and 36 strikeouts in 24.2 innings of work as a junior, landing him second-team all-conference recognition. He helped the Timberwolves reach a Top 50 national ranking with a 25-3 overall record, while also winning the league title and capturing the Boras Classic championship.

Madsen also plays for the Alpha Baseball Club for coaches Adam Farb and Aaron Miles, seeing time as a pitcher and an infielder. In the summer of 2021, he was a member of the Kansas City Royals Scout Team.

“Noah brings great feel and polish for a kid that is young for his class,” said Christy. “With his advanced approach to pitching, he can get hitters out a high level. He can make the ball sink and throw multiple pitches for strikes. His tempo and consistency is something we are excited to see in Lincoln very soon.”

Ranked the No. 2 pitcher in Minnesota by Prep Baseball Report and the No. 12 overall player in the state by Perfect Game, Regal holds a No. 158 ranking nationally among pitchers according to Perfect Game. He is a two-year letterwinner under coach Tom Senne at Mayo High School. As a sophomore, he hit .367 with four homers and 26 RBI, earning all-conference and first-team all-area honors. Regal repeated the all-conference and first-team all-area recognition as a junior with a .397 batting average at the plate and a 1.25 ERA and 71 strikeouts in 39.1 innings on the mound.

Regal also played for the Minnesota Blizzard, where he led the team with a .365 batting average and held a 1.16 ERA in 18 innings of work on the mound in the summer.

“Ian is a versatile multi-sport high school athlete as well,” said Christy. “He has the opportunity to be a two-way player on the field, and his high baseball IQ finds himself in the middle of the action. On the mound, he has a fast arm and current ability to spin the ball from the left side. Ian has high upside, and we are eager to get him to Nebraska.”

A multi-sport letterwinner at Nevada High School, Sanderson holds a No. 2 position ranking and No. 27 overall ranking in Missouri by Prep Baseball Report. As a sophomore, he earned first-team all-conference honors as an outfielder and a pitcher after helping the Tigers to a 19-7 overall record. As a junior, he hit .516 with 18 extra-base hits, 23 RBI and 21 stolen bases at the plate and posted a 5-2 record with a 1.02 ERA and 72 strikeouts in 41.1 innings on the mound to earn all-conference and all-state honors, including Big 8 Player of the Year.

Sanderson has also played for the Marucci Midwest Victus under coach Chris Dralle, leading them to a 33-18 record after hitting .508 with 19 doubles, four triples, 14 home runs, 57 RBI and 46 runs scored.

“Case is one of the premier left-handed hitters in the Midwest,” continued Harvell. “He is ranked the No. 2 first baseman and a top-30 player in the state of Missouri. At 6-2 and 200 pounds, he is very athletic and a middle-of-the-order type bat that has 6.8 speed, so he has the versatility to play an outfield spot as well. His tools and makeup are exceptional, and we believe he is just scratching the surface. We couldn’t be more excited that Case is a Husker.”

Timmerman holds a No. 3 position ranking and No. 6 overall ranking in Nebraska by Prep Baseball Report. The three-sport athlete has lettered two years in baseball at Beatrice High School. Timmerman helped the Orangemen to state titles in basketball and baseball as a sophomore. He set single-season school records with a .554 batting average and 0.24 ERA as a first-team Super State selection in his junior season.

Timmerman has also played for the Nebraska Prospects program for coach Scott Stahlecker, seeing time in the infield, outfield and on the mound. Timmerman notched a .405 batting average at the plate with the Prospects and recorded a 0.18 ERA on the mound.

Timmerman’s father, Ryan Timmerman, was a two-year letterwinner as an offensive lineman at Ball State in 1990-91.

“A previous state champion in baseball, Tucker is a multi-sport athlete that is very competitive,” said Christy. “His work ethic and desire to win stands out and people look at him as a leader. On the mound, Tucker has really started to command the fastball and has a slider that can be a wipeout pitch to both right and left-handed hitters. He checked a lot of boxes that we look for in the recruiting process and we are pumped he chose to be a Husker.”