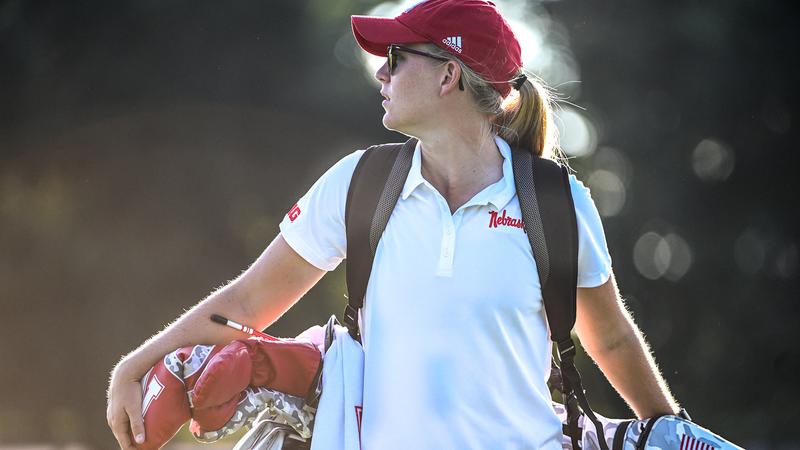 Fresh off record-setting performances at the season-opening Green Wave Classic in New Orleans, the Nebraska women’s golf team makes a short stop in Lincoln before heading to the Badger Invitational in Wisconsin (Sept. 18-20).

Kelli Ann Strand made a momentous collegiate debut by rolling to the Green Wave Classic individual title while tying 2021 All-American and Big Ten Champion Kate Smith’s school record with a 54-hole total of 202 (-14). Strand’s performance included a school freshman record 65 (-7) in the second round. The true freshman from Challis, Idaho, fired a 29 (-7) over the back nine in the second round before opening the third round with a 31 (-5) on the front nine, carding a 60 (-12) over those consecutive 18 holes splitting two rounds. The NCAA record for best round of women’s golf is 61. Strand also was named the Big Ten Golfer of the Week (Sept. 15).

While Strand set the tone, fifth-year Husker Megan Whittaker added a career effort of her own with a 207 (-9) to take sixth, and junior Lindsey Thiele tied for eighth with a career-best 209 (-7). The trio of top-10 individual finishes powered Nebraska to a school-record three-round team score of 835 (-29), shattering the previous school record of 843, set at the 2018 Westbrook Spring Invitational (hosted by Wisconsin) in Peoria, Ariz. (Feb. 25-26, 2018).

The Huskers, who finished second to LSU in a 14-team field in New Orleans, hope to build more momentum off their season-opening effort by challenging a 13-team field in Wisconsin. The Badger Invitational features a strong Big Ten flavor, including Indiana, Iowa and Rutgers, along with Nebraska and the hosts from Wisconsin. The field also includes Colorado State, Delaware, East Carolina, North Florida, Notre Dame, Old Dominion, UC Davis and Washington State.

The three-day tournament at the University Ridge Golf Club in Madison will begin with tee times at 9 a.m. (CT) on Sunday, Sept. 18, after the teams participate in Saturday’s practice round. The tournament continues with the second round on Monday with tee times again at 9 a.m. (CT), before concluding with Tuesday morning’s final round with a shotgun start at 9.

Live scoring for the tournament will be available at GolfStat.com.

Whittaker Back for Fifth Year to Lead Huskers in Big Ten

A hard-working golfer who has shown impressive improvement throughout her five collegiate seasons, Megan Whittaker returns to lead Nebraska in the hunt for an NCAA Regional bid in 2022-23. The graduate student from Elkhorn, Neb., produced Nebraska’s No. 2 stroke average (74.04) in 2021-22, just missing an individual NCAA Regional bid. She trailed only NCAA Regional qualifier Kirsten Baete (73.94) among the Huskers.

Whittaker opened her fifth season as a Husker with a career-best 207 (-9) to take sixth at the Green Wave Classic. It followed a big summer for Whittaker that included a sweep of the Nebraska women’s match play and stroke play championships and a berth in the U.S. Women’s Amateur.

Whittaker produced the first two top-10 individual finishes of her career while matching Baete and Vanessa Bouvet for the team lead with seven top-25 performances in 2021-22.

A star in the classroom and the community, Whittaker earned her bachelor’s degree in finance in May of 2022. She is a four-time WGCA Scholastic All-American, a three-time Big Ten Distinguished Scholar and a three-time Academic All-Big Ten selection. In the community, she earned a prestigious Sam Foltz 27 Hero Leadership Award at Nebraska in 2021. She was also Nebraska’s 2021 Big Ten Sportsmanship Award winner for women’s golf.

Whittaker’s ties to Nebraska women’s golf are very strong, as her mother Kim (Lefler) lettered as a golfer for the Huskers from 1991 to 1994, helping Nebraska advance to the 1994 NCAA West Regional as a senior.

Kelli Ann Strand made a record-setting collegiate debut on her way to an individual victory at the Green Wave Classic in New Orleans (Sept. 12-13).

Strand, a three-time Idaho state champion who was ranked among the top-310 players in the world (WAGR 308) before arriving at Nebraska, set the Husker freshman record with a second-round 65 (-7) while tying the NU record for best 54-hole tournament score with a 202 (-14) at the Bayou Oaks South Course.

A leading contender to earn a second straight Idaho Golf Association Women’s Player of the Year award, Strand produced a strong summer of 2022. After winning the Idaho Women’s Match Play title she took second at the Idaho Women’s Amateur. She was also the runner-up at the Girls Junior Americas Cup (July 24-28) for the second straight year with a three-round total of 205 (-11). She captured third at the IMG Academy Junior World Championship (July 12-15) with a four-round total of 280 (-8), which came before competing at the U.S. Girls Junior Amateur in Kentucky (July 18-23), where she advanced to Match Play before finishing in a tie for 33rd.

Strand earned the No. 1 position in Nebraska’s lineup for the season-opening Green Wave Classic by winning Nebraska’s competitive qualifying rounds in advance of the tournament.

Lindsey Thiele captured her second career top-10 finish by tying for eighth with a career-best 209 (-7)  at the season-opening Green Wave Classic (Sept. 12-13). Her performance included a career-best 69 (-3) in the opening round.

As a sophomore, Thiele (pronounced TEEL) produced a solid 76.89 stroke average while competing in five tournaments.

She shared the individual title with teammate Nicole Hansen at the Marilynn Smith/Sunflower Invitational (Sept. 20-21, 2021). Thiele opened with rounds of 70 and 7) on her way to a then-career-best 219 (+3) at Colbert Hills. Thiele’s effort earned her Big Ten Co-Golfer-of-the-Week honors with Hansen (Sept. 22).

The Wahoo, Neb., native who is the most recent of three sisters (Haley, Hannah) to play golf for the Big Red, was NU’s sixth golfer in the count-four format at the 2021 Big Ten Championship.

An outstanding student, Thiele is a Regents Scholar at Nebraska and a two-time WGCA Scholastic All-American.

Michaela Vavrova missed the first week of fall classes while competing as a member of the Slovakian Team at the World Amateur Team Championships in Paris in late-August. The third-year Husker was Slovakia’s top finisher in a field that featured 56 of the world’s best amateur teams.

Vavrova did not travel to the Green Wave Classic after capping her sophomore season at Nebraska by tying for 17th with a three-round total of 220 (+7) at the 2022 Big Ten Championship. She opened with a career-best 68 (-3) to sit atop the leader board after one round and was tied for fifth at 141 (-1) through two rounds in Pittsburgh.

Vavrova captured her first career collegiate title by firing a career-best 217 (+1) over three rounds at the Stampede at The Creek in Elkhorn, Neb. (Oct. 4-5, 2021). She was named the Big Ten Co-Golfer of the Week (Oct. 6), and closed the 2021 fall campaign with a tie for 10th (217) that included a career-best second-round 69 (-3) to help the Huskers to a runner-up team finish at the White Sands Collegiate.

As a true freshman, Vavrova competed in all 21 rounds in the 2020-21 Husker lineup, posting NU’s fourth-best stroke average (76.33). She notched three straight top-25 finishes (Arizona Wildcat, Allstate Sugar Bowl, Indiana Spring Invite). Vavrova also put up a 224 to tie for 33rd in helping Nebraska to a runner-up team finish at the Big Ten Championship. She was NU’s No. 2 finisher at the NCAA Columbus Regional with her tie for 45th (229).