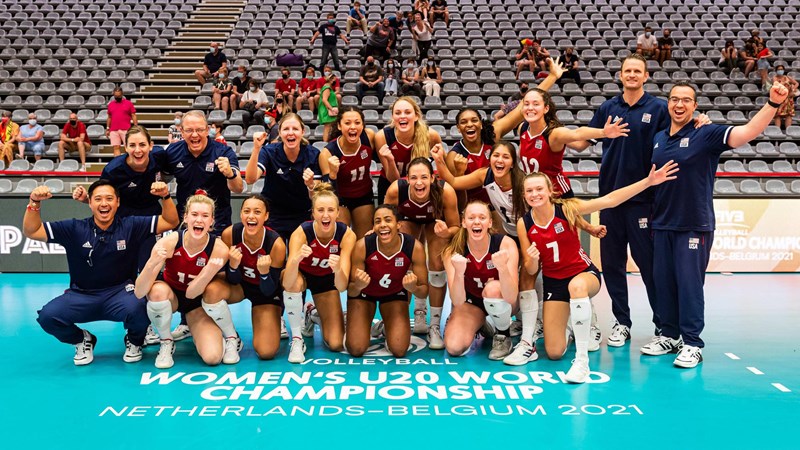 With a roster that included three Nebraska freshmen, the United States volleyball team placed fifth at the 2021 FIVB U20 World Championship, which concluded Sunday.

Outside hitters Ally Batenhorst and Lindsay Krause and libero Lexi Rodriguez each played a prominent role in the United States posting a 6-2 record at the tournament. After helping Team USA to its highest finish since the 2011 U20 World Championship, the trio now turn their attention to their first collegiate season, as the Huskers open the 2021 season next month.

Batenhorst started every match and totaled 82 kills. The Houston native ranked second on Team USA in kills at the U20 World Championship behind Emily Londot, who was the AVCA National Freshman of the Year at Ohio State last season. Batenhorst led the team in kills in four of Team USA’s eight matches. She also served up nine aces to lead the United States in that category. Among the 15-team field, Batenhorst tied for ninth among all players in kills and 15th in aces.

A Papillion native, Krause made the most her playing time. She played in every match and finished with 36 kills on only 79 swings, posting a .316 attack percentage. Krause also tallied eight blocks.

Rodriguez was the Americans’ libero for the entirety of the tournament and led Team USA in digs. Rodriguez was credited with the eighth-most digs of any player at the U20 World Championship.

Husker fans can get their first look at Batenhorst, Krause, Rodriguez and the rest of the Huskers at the annual Red-White Scrimmage, which is set for Saturday, Aug. 21. Tickets for the Red-White Scrimmage are on sale now by visiting Huskers.com/tickets.