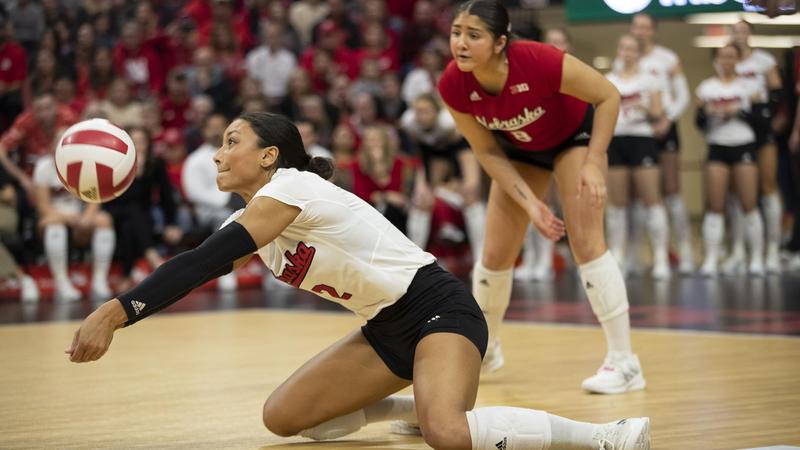 Madi Kubik had a season-high 17 kills and hit .311 with 11 digs to lift the Huskers (24-3, 16-2 Big Ten). Lindsay Krause and Ally Batenhorst each added seven kills. Nebraska hit .192 for the match and held Purdue to a season-low .016 hitting percentage. The Huskers have now won 20 consecutive sets at the Devaney Center.

Nicklin Hames had 22 assists and six digs and became the first Nebraska setter to eclipse 5,000 career kills. Kennedi Orr had 13 assists and four digs. Lexi Rodriguez led all players with 17 digs, and Kenzie Knuckles had a season-best 14 digs, as the Huskers had a 63-53 edge in that category.

At 16-2, the Huskers are alone in second place in the Big Ten standings with two matches remaining. Wisconsin leads the league at 17-1. Ohio State suffered a loss at home to Indiana on Sunday afternoon to fall to 15-3 in conference play. The Huskers host the Badgers in a pivotal match on Friday at 7 p.m. Nebraska controls its own destiny, as wins over Wisconsin and Minnesota at home next weekend would clinch at least a share of the Big Ten title.

Set 1: Purdue went up 4-1, but the Huskers regrouped and battled back to take an 8-7 lead. Purdue answered with another 4-1 spurt however and held a 15-13 lead at the media timeout. Two attacking errors by the Boilermakers tied the score at 15-15, and a swing from Batenhorst put the Huskers up 17-16. Batenhorst added another kill before an ace by Knuckles gave the Huskers a two-point cushion at 19-17. But the Huskers committed two attacking errors, hit into a Purdue block and then let a kill by Raven Colvin fall to the floor, as the Boilermakers went ahead 22-20. After a timeout, Purdue served into the net and hit long to tie the score again, 22-22. The Huskers then came out on top after two long rallies, both ending in Kubik kills. Lauenstein served an ace for the winning point, 25-22. Nebraska ended the set on a 5-0 run.

Set 2: The Huskers got off to a slow start again, as the Boilermakers went ahead 10-4 after a run of five straight points. Krause posted two kills to get the Huskers going, and three straight kills by Kubik preceded two Purdue hitting errors, and the Huskers were back within one at 12-11. Purdue reclaimed a 14-11 lead after two Husker hitting errors, but Kubik tacked on another kill, and Allick had a kill and a block with Kubik to tie the score at 14-14. Allick terminated back-to-back kills to put the Big Red on top, and Kubik added two more kills before two Purdue attacking errors made it 20-15 Huskers. After trailing 12-6, the Huskers reeled off a 14-3 run. Purdue pulled within 23-20, but Krause terminated and Hord and Lauenstein ended the set at 25-20 with a block.

Set 3: The Huskers sprinted out to a 5-0 lead, and three kills by Kubik kept the Huskers up by five, 11-6. Nebraska extended the lead to 15-6 after kills by Allick and Kubik and a block by Allick and Hames, part of a 7-0 run. The Huskers cruised to their sixth straight home sweep with a 25-11 win in the final set.

Up Next: The Huskers close the regular season at home next weekend. Nebraska will face No. 3 Wisconsin on Friday at 7 p.m. at the Devaney Center, and then will turn around to host No. 9 Minnesota on Saturday at 8 p.m.