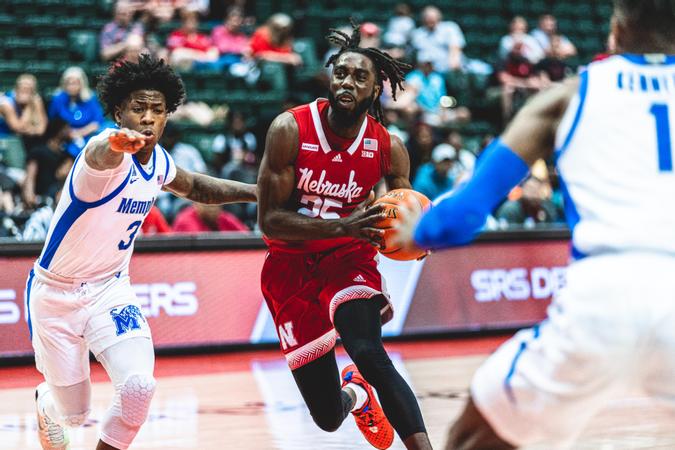 Orlando, Fla. – Emmanuel Bandoumel matched his season high with 18 points, while Derrick Walker posted a double-double in his 2022-23 debut, but 13 second-half turnovers proved costly in a 73-61 loss to Memphis Friday evening.

Bandoumel led NU (3-3) with 18 points, including a trio of 3-pointers, and five assists, while Walker had 15 points and 12 rebounds after missing the Huskers first five games of the season.

Memphis forced five turnovers in the first four minutes of the second half as part of a 9-2 run, turning a 33-30 lead into a 10-point advantage at 42-32 to force a Husker timeout. The Huskers fought back and pulled to within 47-42 after a Walker layup and a 3-pointer from Keisei Tominaga with 13:30 left, but Memphis took over from there.

Alex Lomax, who came into the contest averaging just 4.5 points per game, keyed a decisive 12-2 run with six of his 13 points. Lomax, who was 0-for-8 from the 3-point line on the year to this point, hit a 3-pointer that bounced off the rim and fell in and then had a steal and layup on the Huskers’ next possession pushing the lead back to 10. It was part of a decisive 12-2 spurt that pushed the lead to 15, and the Huskers were unable to get closer than 12 points the rest of the way.

Kendric Davis led four Memphis players in double figures with a game-high 21 points and seven assists, while DeAndre Williams added 16 points for the Tigers, who improved to 3-2 on the season.

In the first half, Nebraska fell behind early but rallied and trailed 33-30 at the break after Keonte Kennedy’s 3-ponter with 24 seconds left gave the Tigers a three-point lead. Nebraska, which struggled from the 3-point line, hit 6-of-14 in the first half, including two each from Tominaga and Juwan Gary. The Huskers started slowly on the offensive end, as Memphis jumped out to an early 11-2 before the Huskers’ bench brought NU back into the contest. Wilhelm Breidenbach’s dunk triggered an 8-0 spurt after 3-pointers from Tominaga and Gary before C.J. Wilcher’s 3-poitner with 7:20 left in the half made it a one-point game.

Memphis eventually stretched the lead back to five on several occasions, the last at 27-22 but Nebraska scored eight of the next 10 points to tie it at 30-all following Gary’s 3-pointer with 48 seconds left in the half. Kennedy’s 3-pointer, the fifth of the half for Memphis, gave the Tigers a three-point lead at the break.

The Huskers will take on Florida State in the final game of the tournament Sunday night at 6:30 p.m. (central). It will be carried on ESPNEWS and on the Huskers Radio Network.

*-Derrick Walker made his 49th career start for Nebraska tonight against Memphis. Walker missed the Huskers’ first five games of the 2022-23 season.

*-Emmanuel Bandoumel tied his season bests in both points (18) and assists (five). He also hit a season-high three 3-pointers in the loss

*-Nebraska’s nine 3-pointers and .375 3-point percentage were both season bests.

*-Nebraska had a season-high 17 assists on 22 baskets against Memphis on Friday. In addition to Bandoumel’s five assists, C.J. Wilcher tied a personal best with four assists.

*-This is the second different lineup NU has started this year. Blaise Keita started at center in NU’s first five games of the season.

*-Nebraska falls to 0-2 all-time against Memphis with the other meeting taking place in the 1954-55 season.