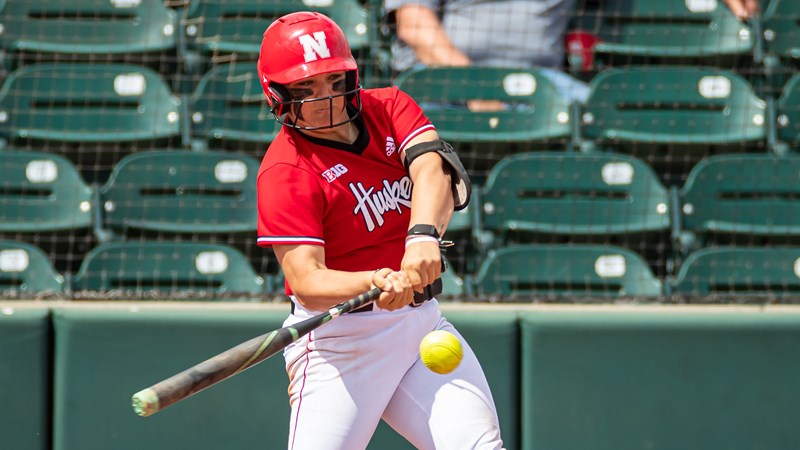 The Nebraska softball team showed tremendous grit and determination in Sunday’s season finale, but the Huskers came up just short in a back-and-forth 6-5 loss at Northwestern.

The teams combined for 24 hits and runs were scored eight of the 13 half-innings. Nebraska led early, fell behind and fought back to tie the game at 3-3. Northwestern led 6-3 after five innings but the Huskers scored single runs in the sixth and seventh innings before their rally fell just short.

With the win, Northwestern won the series and ended the regular season with a 29-15 record. Morgan Newport (6-3) earned the win with a complete-game effort, as she allowed five runs on 11 hits but struck out seven.

Offensively, freshman Billie Andrews was 3-for-4 with a pair of RBIs. Three other Huskers had multi-hit games, including a pair of seniors playing their final game. Tristen Edwards went 2-for-4 in her final game and Rylie Unzicker was 2-for-3, and both players homered in their final at bat. Senior Cam Ybarra, who plans to return to Nebraska next season, finished 2-for-4 with a double.

For the first time in the series, it was Nebraska who jumped out to an early lead with one run in the top of the first inning. The Huskers loaded the bases with no outs on consecutive singles from Billie Andrews and Edwards and Ybarra. After a pop out, Ferrell brought home the game’s first run with an RBI ground out.

Nebraska threatened again in the second inning. Senior Ally Riley lined a single off the wall in right center with one out. Then with two outs, Billie Andrews singled for the second time in as many innings, but the Huskers stranded Andrews and senior pinch runner Sarah Yocom following a pop out.

In the bottom of the frame, Northwestern began the inning with back-to-back singles before freshman Caitlynn Neal made a nice catch on a hard-hit ball to left field. The runners moved up to second and third on a ground out and Northwestern tied the game on a two-out RBI single. A walk then loaded the bases before a foul out ended the inning.

Northwestern then took a 3-1 lead in the bottom of the third on a two-run home run from Newport. The Wildcats then loaded the bases with two outs but could not add to their lead.

Nebraska tied the game in the top of the fourth. Sophomore Brooke Andrews led off with a double and Unzicker followed with a single to put runners on first and third with no outs. After a pop out, Unzicker stole second before a strikeout marked the second out of the inning. But Billie Andrews delivered a two-out, two-run single down the third base line to tie the game at 3-3.

Northwestern came right back and regained the lead in the bottom of the frame. An infield single, a stolen base, and a bloop RBI single put the Wildcats back on top, 4-3.

The Wildcats stretched the lead to 6-3 in the bottom of the fifth. A leadoff double, an infield single and an RBI double plated the first run of the inning. With runners at second and third and no outs, an RBI ground out scored another run before Wallace retired the next two batters.

The Huskers continued to fight in the top of the sixth. After Brooke Andrews saw a potential home run go just outside the left-field foul pole, the next batter Unzicker kept one fair down the left field line for a solo home run that trimmed the lead to 6-4.

Nebraska still trailed by two heading into the seventh inning and Edwards quickly cut that lead to one with a towering one-out solo home run. But the next two batters were retired, ending the Huskers’ comeback bid.