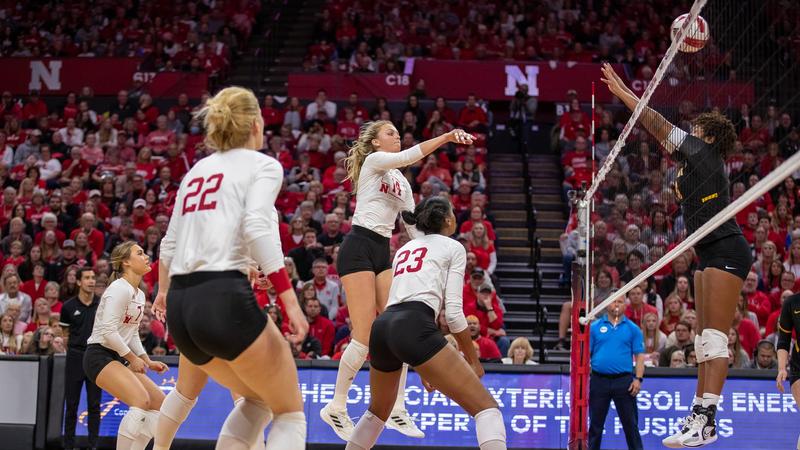 MATCH PREVIEW
• The Nebraska volleyball team heads into the final two weeks of the regular season with another Friday-Sunday pair of matches. The sixth-ranked Huskers will play at Iowa on Friday at 6 p.m. before hosting No. 19 Purdue on Sunday at Noon.
• Friday’s match at Iowa will be streamed on B1G+ (subscription required).
• Sunday’s match vs. Purdue will be televised on BTN and streamed on FoxSports.com.
• The Huskers Radio Network will broadcast all the action on their radio affiliates, including 107.3 FM in Lincoln and AM 590 in Omaha. A live audio stream will be provided at Huskers.com and the Huskers app. John Baylor is in his 29th season doing play-by-play for the Husker volleyball program. Lauren (Cook) West, a former All-America setter for the Huskers, will provide color commentary.

• With two weeks left in the regular season, the Huskers are in third place in the Big Ten standings at 14-2, behind Wisconsin and Ohio State at 15-1.

• Nebraska is hitting .249 as a team and is holding opponents to .125 hitting, which leads the nation. The Huskers rank 10th nationally at 2.76 blocks per set.

• Nebraska opened the season in a 5-1 system but has been in a 6-2 system since Sept. 1 against Loyola Marymount. Nicklin Hames (5.71 assists per set) and Anni Evans (4.35 assists per set) have run the 6-2 for the Huskers since Hames returned to the lineup on Oct. 14 against Penn State after a one-month absence with an injury.

• Hames, who is in her fifth season at NU, has 4,975 career assists and broke Fiona Nepo’s (1995-98) career assists school record on Oct. 22 at Illinois. Hames ranks sixth among active NCAA Division I setters in career assists. An exceptional defensive setter, Hames ranks second on the team in digs at 3.15 per set this season.

• Outside hitter Madi Kubik is averaging a team-high 3.23 kills per set and adds 2.26 digs per set. Kubik surpassed 1,000 career kills on Sept. 10 against Long Beach State, becoming the 24th Husker all-time to reach that mark.

• Outside hitter Whitney Lauenstein is averaging 3.04 kills per set and has a team-high 24 service aces. Lauenstein had a career-high 25 kills on .385 hitting in a win at No. 17 Creighton on Sept. 7. It was the most kills by a Husker in a match since Mikaela Foecke had 27 kills in the NCAA Championship match against Stanford in 2018.

• Middle blocker Kaitlyn Hord is averaging 1.38 kills and a .296 hitting percentage to go with 1.63 blocks per set, which leads the nation. Hord ranks No. 2 among active NCAA Division I players in career blocks with 659.

• Sophomore libero Lexi Rodriguez is averaging a team-best 4.15 digs per set. Rodriguez is the reigning AVCA National Freshman of the Year and Big Ten Defensive Player of the Year. She was named the Big Ten Co-Defensive Player of the Week on Oct. 10 after averaging 6.00 digs per set in sweeps at Michigan State and Michigan, including a season-high 25 digs in the three-set win over the Wolverines.

• Freshman middle blocker Bekka Allick is putting up 2.03 kills per set on a team-high .346 hitting percentage with 1.01 blocks per set. Allick was named Big Ten Freshman of the Week in back-to-back weeks on Oct. 17 and Oct. 24.

• Michelle Urquhart leads the Hawkeyes with 2.54 kills per set and adds 2.39 digs per set.

• Amiya Jones contributes 2.51 kills per set and has served 36 aces.

• Freshman Eva Hudson leads Purdue with 4.33 kills per set on .256 hitting. She also adds 1.92 digs per set and has served 29 aces. Hudson has been named Big Ten Freshman of the Week seven times already this season and has been Big Ten Player of the Week twice.

• Nebraska is 36-0 all-time against Iowa, and the last five wins have been sweeps. The Huskers swept the Hawkeyes last Friday in Lincoln. Nebraska’s defense had a strong showing, holding Iowa to just 17 kills in the match, tied for the fewest by a Husker opponent this season. The Hawkeyes finished with a -.070 hitting percentage, the lowest hitting percentage by a Husker opponent since 2013 and the best defensive effort by the Huskers in Big Ten play since joining the conference in 2011.

HUSKERS RANKED NO. 6 IN AVCA POLL

• Nebraska is ranked No. 6 in the AVCA Coaches Poll this week.

• The Huskers were ranked No. 1 in the preseason poll, the first time since 2016 the Huskers started a year atop the poll. Nebraska also held the No. 1 ranking the week of Oct. 24.

• Nebraska has been ranked No. 1 in 102 all-time polls, the most in NCAA history.

• The Huskers have been ranked in the top 10 a total of 528 times, which is also the most in NCAA history.

• Nebraska has appeared in all 584 AVCA Coaches Polls it has been eligible for since it was established in 1982. Nebraska is the only program to be ranked in every eligible poll all-time.

• Cook has 813 career wins and is one of the all-time winningest coaches in NCAA history. Since taking over the program in 2000, Cook has led the Huskers to a nation-leading .873 win percentage (652-95).

• Reyes joined the Husker staff in March 2018. As the Huskers’ recruiting coordinator, he has helped NU land the nation’s No. 1 recruiting classes for 2021 and 2023, and the No. 2 class for 2022, according to PrepVolleyball.com.

• Nebraska volleyball fans have continued to set the bar for attendance throughout the years:

• A new NCAA attendance record was set at the 2021 NCAA Championship with 18,755 fans turning out to watch Wisconsin and Nebraska battle for the national title at Nationwide Arena in Columbus, Ohio.

• Eight of the top nine crowds in NCAA Volleyball history are all matches that have involved the Huskers.

• When Nebraska played at Creighton on Sept. 7, 2022 at the CHI Health Center, a then-regular-season NCAA record crowd of 15,797 turned out to watch the Huskers defeat the Bluejays, 3-2. It shattered the previous regular-season record of 14,022 (set by Nebraska and Creighton in 2018). The record lasted nine days, however, as Wisconsin and Florida drew a crowd of 16,833 to the Kohl Center on Sept. 16.

• Of the 14 largest NCAA volleyball regular-season crowds, 13 have been matches Nebraska played in.