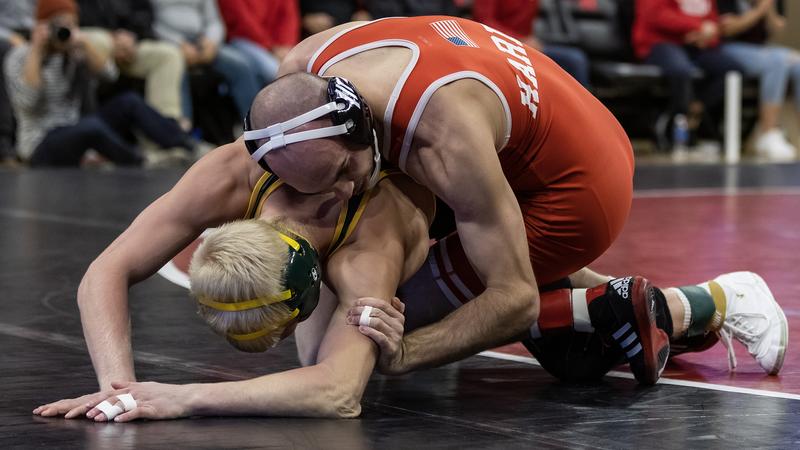 At 133, Dryden received a first-round bye before defeating Navy’s Mirel in the quarterfinals. In the semis, Dryden grabbed the 6-5 decision of Phippen of USAF to advance to the finals where he rematched with Phippen and won by decision, 3-2.

Hardy at 141 tallied a pair of major decision victories in the opening rounds to earn a spot in the quarters, where he pinned Newell of Kent State to qualify for the semis. There he recorded the technical fall against Chappell of Bucknell for a place in the finals. In the championship match, Hardy scored the 9-1 major decision victory over Miller of Bucknell for the title.

At 157, Robb received a bye, recorded a pin and won by major decision in the quarters for a spot in the semis where he won by technical fall, 16-1. In the finals, Robb defeated Michigan State’s Saldate by 12-6 decision.

Rounding out the group of individual champions was Allred at 197. Allred received a bye and tallied back-to-back pins to grab a spot in the semis. There he scored a major decision victory before defeating Koser of Navy by decision, 9-4.

At 184, Lenny Pinto had a successful day, recording a major decision in the Round of 12 and in the semis to advance to the finals. In the championship match, Pinto was pinned, but finished in second-place. Also grabbing second was Brown Ton, who recorded three wins before forfeiting in the finals to teammate Labriola.

Up next, the Huskers will return to action next month at the Cliff Keen Invite, Dec. 2-3 in Las Vegas.