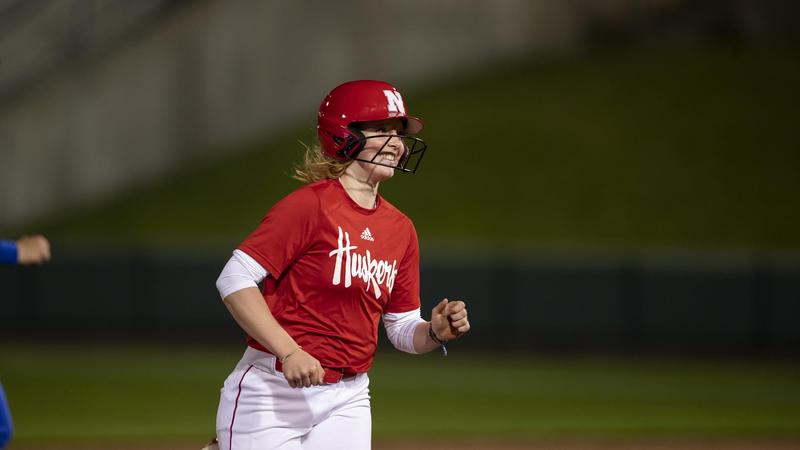 The Nebraska softball team claimed a 10-0 victory over Nebraska-Kearney Thursday night. The Huskers tallied 10 hits including three home runs while holding the Lopers to only one hit.

The Huskers scored first in the bottom of the second inning. Felder led off with a double down the left field line followed by a Kinney reaching first on an error. Brooke Andrews reached first on a fielder’s choice, advancing Dakota Carter, who was pinch running for Felder, to third. Carter scored on a wild throw to second, putting NU ahead 1-0.

Nebraska added two more runs in the bottom of the third inning. With two outs, Courtney Wallace singled up the middle. Gray followed with a homer to center field to extend the lead to 3-0.

NU added another run in the bottom of the fourth inning. With two outs, Brooke Andrews walked. Caitlynn Neal followed with a double to left field, scoring Andrews. The Huskers headed into the fifth inning ahead, 4-0.

After Gray singled up the middle, Felder smashed a homer to extend NU’s lead to 6-0 in the bottom of fifth inning.

In the bottom of the sixth inning, the Huskers added three runs. With one out, Brooke Andrews walked. Neal added her second double of the night to left center field, scoring Tokheim, who was pinch running. With two outs, Billie Andrews singled to shortstop. Wallace tripled to right field, scoring Neal and Andrews. The Huskers went into the top of the seventh, ahead 9-0.

Freshman Talia Tokheim capped the night with a solo homer to center field in the bottom of the seventh.

The Huskers claimed the victory over the Lopers, 10-0.

Nebraska returns to action on Thursday, Sept. 29 for the final scarlet and cream scrimmage of the fall season. The game will start at 3:30 p.m. and admission is free.