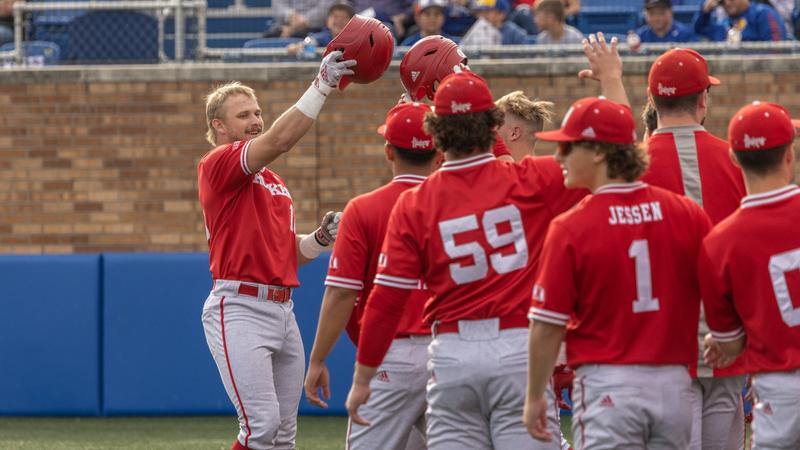 Nebraska baseball wrapped up its fall schedule with a 12-9 win in a 14-inning exhibition at Kansas on Saturday evening in Lawrence.

The Huskers jumped ahead with a two-run homer by Caron in the first frame. Kansas got one run back in the first, before back-to-back homers by Fischer and Everitt extended the lead to 4-1 in the second.

A two-run homer in the bottom of the fourth tied the game back up at four.

Nebraska responded with a solo homer by Anderson in the fifth, while an RBI single in the bottom half of the inning locked the game in a 5-5 tie.

Kansas grabbed its largest lead of the night with an RBI single and a bases-clearing double to make it a 9-5 game after 10 innings.

The Huskers threatened with a two-out double by Luke Jessen and a walk to Cayden Brumbaugh in the 11th, but KU kept the Big Red scoreless to maintain the four-run lead.

Everitt singled and Gabe Swansen reached on an error, before an RBI single from Dayvin Johnson and Brumbaugh’s RBI double brought the Huskers within two in the 13th.

Nebraska tied the game at nine in the top of the 14th with a two-run blast by Ben Columbus. Luke Sartori plated the go-ahead run on a passed ball, while a botched pop-up allowed Swansen to come around and score to double the lead to 11-9.

The top of the 14th was called off early because of a pitch count, which added one more run to the Nebraska lead. Garza shut down the Jayhawks in the bottom of the 14th to clinch the victory for the Huskers.