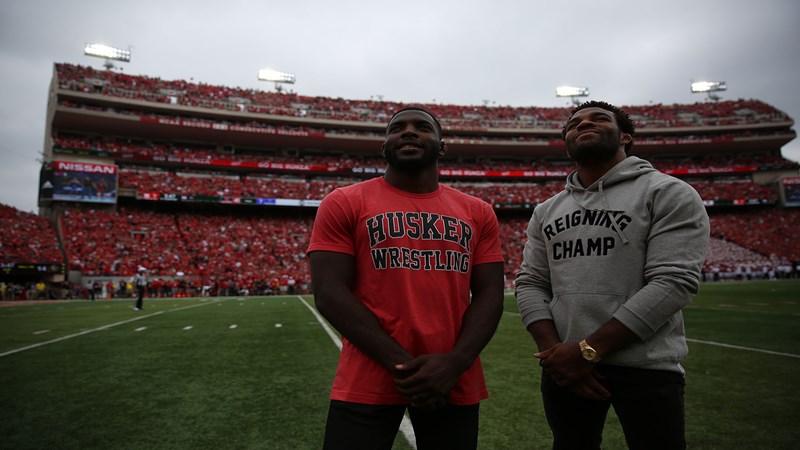 This weekend at the U.S. Olympic Team Trials, former Husker wrestlers and current international wrestling standouts Jordan Burroughs and James Green compete for a chance to represent the United States at the postponed 2020 Tokyo Olympics. The trials will be contested at the Dickies Arena in Fort Worth, Texas on April 2-3.

Fifteen of the 18 winners this weekend will cement their spot on the U.S. team headed to this summer’s Olympics. Three categories on the men’s side have not earned an Olympic qualification for the U.S., therefore the winners of those categories will have to place first or second at the World Olympic Qualifier May 6-9 in Sofia, Bulgaria.

Burroughs, who was a two-time national champion at Nebraska, has competed at the last two Olympics, including a gold-medal performance at the 2012 London games. He is one of seven Huskers to wrestle at the Olympics and the fifth medalist for the program as he joins Rulon Gardner as one of two Nebraska grapplers to earn Olympic gold. Burroughs will not wrestle until the best-of-three finals on day two of the trials thanks to his 2019 world medal-winning performance. The four-time world champion is tied for second in United States history with a combined five world and Olympic titles.

Green, a four-time All-American for the Huskers, starts his campaign to his first Olympic Team this weekend at the trials. The 2014 Big Ten Champion is seeded fourth at 65 kg for his second Olympic Trials appearance. A five-time World Team member at 70 kg, he won bronze in 2015 and silver in 2017 at the World Championships. After a first-round bye, Green will meet No. 5 seed Joey McKenna (Pennsylvania RTC/TMWC) in his first match of the trials. The winner of the weight class will have to qualify the weight for the Olympics at the world qualifier.

Session Schedule and How To Watch

The event begins with challenge tournament preliminary rounds and quarterfinals for all weights in all three Olympic styles starting at 10 a.m. (CT) on Friday, April 2. Semifinals and finals of the challenge brackets will be wrestled Friday at 6:30 p.m. (CT). Saturday’s action begins with consolation rounds, including third-place matches, at noon (CT). The best-of-three finals for each weight class will be contested Saturday evening at 6:30 p.m. (CT).

The Olympic Trials will be broadcast on NBCSN, Peacock and NBC digital platforms. Championship series coverage will begin at 6:30 p.m. (CT) on Saturday, April 3 on NBCSN.