Dave Feit: Who I Am as a Nebraska Football Fan 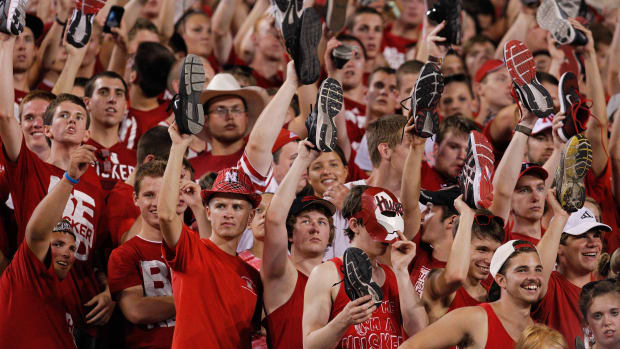 Earlier this week, I honored to be a guest on the Go Big Redcast’s “Fan Four’em.” I had a blast talking Huskers with Honke and Rob. I encourage you to head over to their YouTube page to watch the whole thing.

As I was thinking about my answers, I realized that in the course of those four questions, I was describing who I am as a Nebraska fan. The foundation of my fandom, the experiences I’ve had as a fan, and the players and teams I root for.

These have all shaped how I view the current year’s team, the program as a whole, and especially the words I write here. So, I thought it might be nice to turn the spotlight on myself to give you a better view of where I’m coming from.

NOTE: These aren’t direct quotes of what I said on the Redcast. The four questions spurred some great side discussions (and a couple of fun rabbit holes), so I encourage you make time to watch the full show over on their channel. Consider this the condensed version.

How did you become a fan?

I really don’t recall any specific moment. I think that’s part of what it means to grow up in Nebraska – especially during the 1980s. Nebraska fandom was just something you were born with, and something that grew year after year.

Like every other kid of my generation, I have traumatic memories of the failed two-point conversion in the 1984 Orange Bowl.

Starting when I was 8 or 9, my dad would get a pair of tickets to one game a year. We’d drive down from Gretna and spend the day walking around campus and downtown. Coming to Lincoln for games was like Christmas and my birthday all rolled into one.

Otherwise, since so few of the games were on TV, a big part of becoming a fan was listening to games on KFAB on a transistor radio while I kicked a football around the yard.

What is your favorite memory?

1987. #2 Nebraska vs #3 UCLA. This was easily the biggest game I ever went to as a kid. Looking back, I’m not really sure how my dad got tickets. We were up fairly high in south stadium, so I was using Dad’s binoculars quite a bit to watch the action on the field.

As one of the huddles broke, I saw Steve Taylor give Rod Smith a little pat on the backside. Knowing absolutely nothing about anything, I said “he’s going to throw it to #88”.

Taylor faked a handoff to the fullback, dropped back, and hit Rod Smith over the middle for a 48-yard touchdown. It was Taylor’s third touchdown pass of the (then) school record five he would throw on the day.

By this point in my life, I already considered myself a big Husker fan. But this moment cemented it. I was one of the few people in the crowd of 76,000 who “knew” what was about to happen. The game was broadcast on ESPN, but nobody watching at home saw that moment (the broadcast briefly shows the NU huddle but cuts to Broderick Thomas on the bench, then a cheerleader).

Looking back, this is the moment where I first knew that I’d much rather watch games in person than on TV or listening on the radio. This has led to me being able to count the number of home games I’ve missed in the last 29 seasons on one hand.

Who are your all-time favorite Huskers?

Until my freshman year at UNL (1993), I had never been to more than one game a year. Now I had season tickets and could watch every snap. It didn’t matter to me that the 1993 Huskers destroyed everybody who came to Lincoln (average margin of victory for the seven home games: 32 points), I was going to soak it all in.

In 1993, there this fourth or fifth string I-back that would get some carries late in the fourth quarter. I had no idea who he was, but I loved hearing the old stadium announcer say “Bawl carried by MACK – oh – VICK – uh” after every attempt.

In addition to that beautifully lyric name, I thought Jeff Makovicka was a pretty decent back. But he was buried behind Calvin Jones, Lawrence Phillips, Damon Benning and Clinton Childs on the depth chart.

In 1994, he moved to fullback and was a key backup on a national championship team, before becoming a starter on the greatest team of all time. Obviously, Jeff’s brother Joel is another one of my favorites.

My appreciation for the Makovickas evolved into an overall love for walk-on fullbacks from small-town Nebraska schools. There is something great about a kid who walked on from a small Nebraska town paving the way for a four-star running back. This culminated with a kid from my hometown: Andy Janovich – the last of the great Nebraska fullbacks.

There had been kids from my high school who walked over the years, but Jano was the first to see real playing time in almost 30 years. Even though Gretna was no longer the smaller Class B school I grew up in, it is still really cool to have a kid from your hometown playing for the Huskers – especially when they have success. Jano’s touchdown against Wisconsin might be my favorite moment from any NU loss.

How do you think the Huskers will do this year?

When Frost was hired, I had a blind faith that it would work. I knew it wouldn’t happen overnight, but I was confident – nay, CONVINCED – that he would rebuild the things that needed fixing, establish a high-powered offense, and get Nebraska “back.”

But these last four years have erased that blind faith.

I think everything could click for this year’s team – and for the program as a whole. And to be very clear – I would love for that to happen. Absolutely LOVE for it to happen.

But – I have a “prove it” mentality. Is Casey Thompson fully healthy and ready to do things either Martinez could not do? Prove it. Can the defense replace the losses on the line and secondary without taking a step back? Prove it. Will Frost really turn over control of the offense to Whipple? Prove it. Can Donovan Raiola transform the offensive line from a liability into a strength? Prove it. Can NU avoid stupid mistakes and not melt down on special teams? Prove it.

I’m on record that I’ll be happy with six wins. Could they get more? Sure. Could they go 3-9 again? Absolutely. So that’s where I’m at: Get to a bowl game and build from there. Hopefully we can have an “under-promise / over-deliver” type of year. That would be a nice change.

Long term, I have higher standards than six wins. But I’m realistic on where this program has been in the last four years, what happened last year, and how many new parts and pieces need to click together in order to make a run at 8+ wins.

Again, my deepest thanks to the folks at Go Big Redcast for having me on. It was ton of fun. Be sure to check them out.