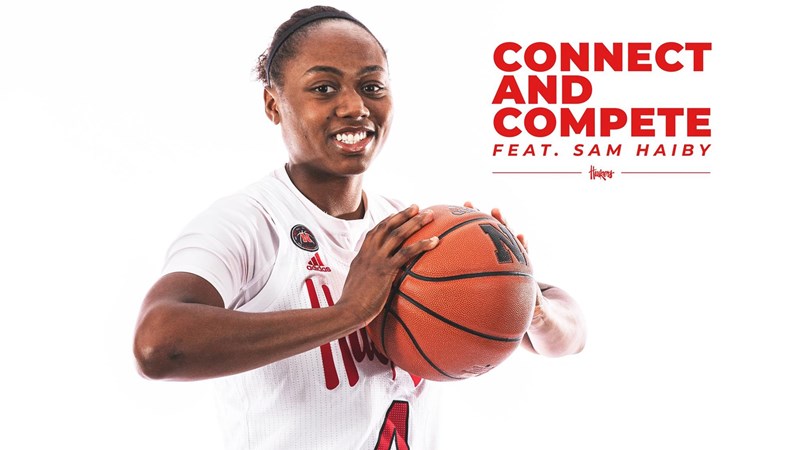 It’s a new season with a new squad. Follow along as the Huskers recap 2020-21 and invite you to meet some new faces along the way.

Sam Haiby tepped into the spotlight last season in her third year in the Nebraska women’s basketball program.


The 5-9 guard from Moorhead, Minnesota, captured second-team All-Big Ten honors by averaging team highs of 16.8 points, 4.4 assists and 1.2 steals while also ranking third among the Huskers with 6.8 rebounds per game.

Haiby’s versatility allowed her to be the only Big Ten player to rank among the top 15 in the conference in scoring (11th), rebounding (15th) and assists (8th).


While Haiby’s statistics reached All-Big Ten levels, she believes she made her greatest gains in the areas of leadership and consistency. She also believes those same areas provide her with the biggest opportunities for individual and team growth in 2021-22.

“I think it is most important for me to continue to grow as a leader,” Haiby said. “There’s always ways I can improve on the stat sheet, but with five new teammates it is going to be important to keep practices competitive and make sure everyone has the same goals in mind.”

Entering a 2020-21 season clouded by the uncertainty of the pandemic, Haiby, Isabelle Bourne and Kate Cain became summer “leadership interns” for Head Coach Amy Williams and the Huskers.

“We are really proud of the strides Sam made last season, as she stepped up in big moments and led our team in many areas,” Williams said.  “Sammi’s growth as a leader for our program was instrumental as we navigated the challenges of COVID.  She was intentional about her approach to leadership and has really embraced the importance of providing strong leadership and high expectations of herself and her teammates.”

Nebraska’s trio of “leadership interns” eventually became captains and led the Huskers to the postseason despite being forced to replace three starters and several other significant contributors from a 2019-20 team that finished 17-13.

“Sam was a huge part of our success last season. She’s the type of player you want on your team,” Bourne said. “She’s someone that leads by example and takes the team under her wing in times of pressure. She is a calming presence, which I thought was extremely necessary for us on the court last year.”

The captains and all the Huskers were challenged even more by the restrictive and unpredictable environment of the pandemic.

“COVID presented a lot of challenges for every team. We didn’t know if we would play our next game, or if we were going to be able to finish our season,” Haiby said. “Not knowing what was ahead for us made it hard. But it also made us realize how important it is to stay focused and continue to get better every day.”

In her second season as a full-time starter for the Big Red in 2020-21, Haiby played big in Nebraska’s biggest games. In NU’s Big Ten-opening win over Illinois, she erupted for a career-high 33 points to go along with nine rebounds and four assists in a win over the Fighting Illini.

Three weeks later, Haiby came up with 19 points, eight rebounds and five assists in a 65-63 upset of No. 15 Northwestern. Her final two points and rebound came in the closing second, when she grabbed her own miss and immediately put it back up for the winning basket as time expired against the Wildcats. Her circus shot was named ESPN SportsCenter’s Top Play on New Year’s Eve.

Just three days later, Haiby was back at it with 16 points, five rebounds and five assists in a low-scoring 53-50 win over Rutgers. She was named the College Sports Madness Big Ten Player of the Week for those two performances.

“Sam is the type of leader who will want nothing but for the team to succeed. Whatever it was that we needed to do to win, she would be the one to lead the way,” Bourne said. “Both Sam and I pushed each other to be better leaders in different categories on and off the court last season. We feel comfortable enough to tell each other what we can do better and share the load in that sense, and that kind of constructive criticism is something really special that we share.”

“We spent a lot of time discussing Sam’s ability to improve her rebounding production, and she went on to be not only one of the top rebounders on our team, but one of the best rebounding guards in our league,” Williams said. “When she puts her mind to something, she is more than capable of making it happen.”

Bourne was injured late in the win at Michigan State, forcing Haiby to carry even more responsibilities in the next game against No. 15 Ohio State. Haiby notched another double-double with 11 points and a career-high 10 assists to go with eight rebounds in a 63-55 win over the Buckeyes (Jan. 16).

As the season progressed, Haiby poured in 28 points at Iowa (Feb. 11), before producing 24 points, nine rebounds and six assists in a narrow loss to No. 7 Maryland in the Big Ten Tournament quarterfinals (March 11).

Against the Terrapins, Haiby became the 35th Husker in history to achieve 1,000 career points. She ended the season ranked No. 32 in the Nebraska record book with 1,039 points.

Haiby, who finished the year with 10 20-point performances among her 21 games scoring in double figures, helped lead Nebraska to five wins over top-25 teams last season – the second-highest total among the 14 Big Ten Conference schools.

“We showed great toughness and perseverance last season, and we were rewarded with some huge upsets and wins throughout the year,” Haiby said. “I can see us winning games in the same way we did this past season. We will have a few more scoring options, but we’re going to have to continue to be solid on defense to keep scores in our favor.”

Haiby’s production and leadership helped Nebraska earn a trip to the 2021 Postseason WNIT, where the Big Red advanced to the round of 16 in Memphis. The taste of the postseason for the young Huskers has made them even hungrier to reach the next level with an NCAA Tournament berth in 2022.

“We know what we can accomplish as a team, and it is going to be important to continue to press forward,” Haiby said. “Making the NCAA Tournament is the ultimate goal. We are proud of what we accomplished last season, but we know now that we are capable of much more. We need to continue to get better and play as a team, and special things can happen.”

Nebraska returns everyone from its 2020-21 roster except three-time Big Ten All-Defensive selection Kate Cain. The 6-5 center was one of 15 candidates for the Naismith National Defensive Player of the Year award and anchored NU’s defense at the rim for four seasons, shattering the school record with 352 blocks. Cain also averaged 9.2 points and 6.6 rebounds over her 118-game Husker career as a four-year starter.

The new scoring options for the Huskers could come from several 2021-22 newcomers, starting with 2021 Nebraska Gatorade High School Player of the Year Alexis Markowski. The 6-3 forward out of Lincoln Pius X averaged 23.3 points and 13.0 rebounds as a senior to lead the Thunderbolts to their second straight Class A state championship and a final top-25 national ranking from MaxPreps.

The Big Red add another Nebraska high school star in 5-10 guard Allison Weidner. A two-time first-team Super-Stater alongside Markowski, Weidner finished No. 3 in state history with 2,282 points. A remarkable all-around athlete, she added 7.0 rebounds, 6.4 assists and 6.4 steals per game for the Class D2 state champion Humphrey St. Francis Flyers in 2021. She was also an eight-time gold medalist at the Nebraska state track and field meet in her career.

Sophomore Jaz Shelley could provide another potent scoring threat as well. The 5-9 Oregon transfer hit 10-of-14 three-pointers for the Ducks on her way to 32 points in a win over UC Riverside as a freshman (Dec. 16, 2019). She joins fellow Australians Isabelle Bourne and Ruby Porter on the Husker roster this season.

Kendall Coley, Nebraska’s highest ranked recruit in the 2021-22 freshman class, will also have the advantage of a semester of collegiate experience after joining the Huskers in January of 2021.

Kendall Moriarty and Tatiana Popa round out Nebraska’s incoming freshmen, while the Huskers also hope to benefit from potentially healthy returns for guards Nailah Dillard and Trinity Brady after being sidelined by injuries in 2020-21.

Williams believes the challenge for Haiby in 2021-22 will be continuing to grow as a player and a leader while helping to create great connections with her Husker teammates.

“Heading into the upcoming season, we are excited for Sam to take another leap forward and approach her growth as a leader and player with a similar or greater sense of urgency as last season,” Williams said. “She is a competitor, and her ability to infuse competition into our daily training, while leading our team’s connectivity will be an important factor in our success.”

Haiby said she is looking forward to the challenge of leading a larger group of Huskers while also pushing herself to be her best as a player and a leader.

“I think this group is extremely motivated,” Haiby said. “It will be a competitive atmosphere and a fun environment to be around. As a leader, it will be important for me to have everyone on the same page and continue to lead by example and experience as much as I can.”