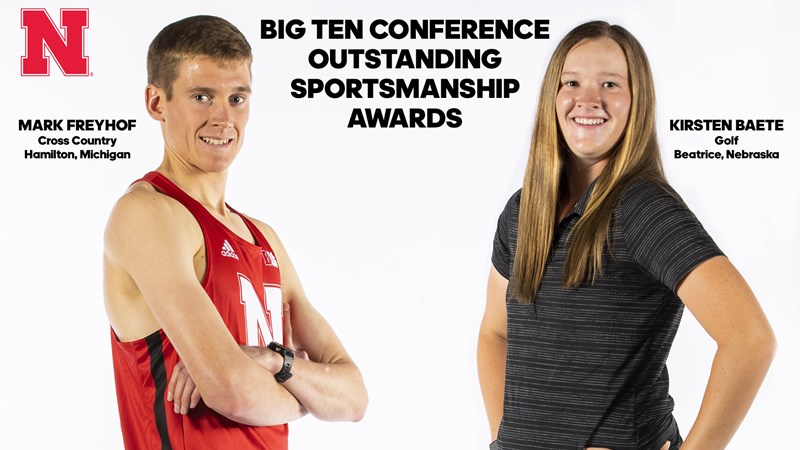 The Big Ten announced the 28 Outstanding Sportsmanship Award winners as the top male and female representatives from each of the 14 conference institutions. The 28 honorees were chosen from a group of 350 students honored throughout the academic year who earned Big Ten Sportsmanship awards in their respective sports.

Baete, a fifth-year senior from Beatrice, Neb., earned her second consecutive NCAA Regional appearance in 2022 after capturing a spot on the Big Ten All-Championship Team with a fourth-place finish. She added second-team All-Big Ten honors for her performance throughout the season, which included an individual tournament title at the White Sands Intercollegiate (Oct. 22-24, 2021).

In addition to her success on the course, Baete was one of Nebraska’s top performers in the classroom. A four-time WGCA Scholastic All-American and a four-time Big Ten Distinguished Scholar, she was one of just five Husker student-athletes across all sports to be named a Nebraska Outstanding Scholar in 2022. The four-time Academic All-Big Ten choice was also a 10-time member of the Nebraska Scholar-Athlete Honor Roll. The elementary/special education K-6 major also excelled in the community, earning Nebraska’s Big Ten Sportsmanship Award for women’s golf as a senior, after claiming five spots on the Tom Osborne Citizenship Team from 2018 to 2022. She was also a Sam Foltz 27 Hero Leadership Award winner in 2019. She was the only golfer in the conference to be named an Outstanding Sportsmanship Award winner in 2022.

Freyhof, a senior from Hamilton, Mich., produced equally impressive all-around credentials in his six seasons as a student-athlete at Nebraska. A USTFCCCA All-Midwest Region runner before competing at the 2018 NCAA Championships, Freyhof was a four-time Big Ten Distinguished Scholar and five-time Academic All-Big Ten selection. He was also a 10-time Nebraska Scholar-Athlete Honor Roll member. He earned his bachelor’s degree from Nebraska in May of 2020, and was chosen to receive a $7,500 Big Ten Postgraduate Scholarship in May of 2022. He is pursuing his master’s degree in agriculture and biological systems engineering. He was also a four-time member of the Tom Osborne Citizenship Team. He was the only cross country runner in the conference to be named an Outstanding Sportsmanship Award winner in 2022.