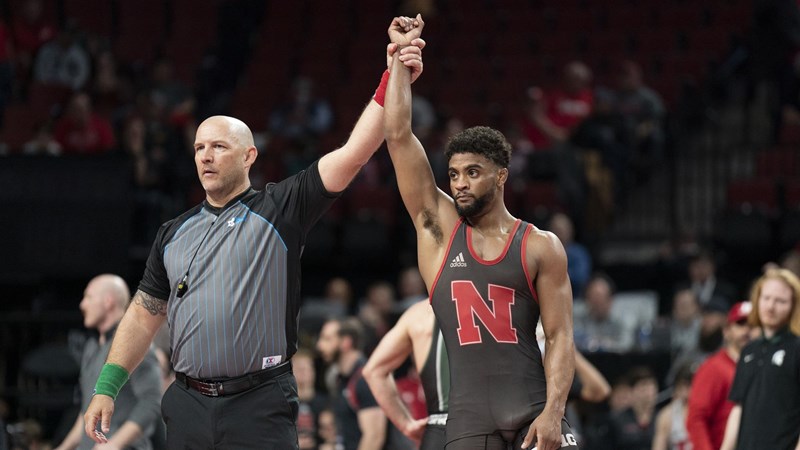 Lincoln – A total of 76 Husker student-athletes will earn degrees this weekend during the University of Nebraska-Lincoln’s commencement ceremonies, with graduate commencement occurring on Friday at 3 p.m. at Pinnacle Bank Arena, before undergraduate commencement is scheduled to be held at Memorial Stadium on Saturday at 10 a.m. If inclement weather becomes a factor for the May 14 ceremony, it could be pushed back to Saturday or Sunday afternoons.

Jay Keasling, a UNL alumnus and a leader in the field of synthetic biology, will deliver the undergraduate commencement address. Marco Barker, vice chancellor for diversity and inclusion at Nebraska, will give the address at the graduate and professional degree ceremony on May 13.

The large collection of Husker graduates across all sports is highlighted by a 2022 NFL Draft pick and eight All-Americans who have combined for 24 All-America awards during their impressive competitive careers.

Cameron Jurgens, who was the No. 51 overall pick by the Philadelphia Eagles in the 2022 NFL Draft, earns his bachelor’s degree as a nutrition and health sciences major. An All-Big Ten selection in 2021, the offensive lineman from Beatrice, Nebraska was a three-time Academic All-Big Ten choice. He heads a class of nine graduates from the Nebraska football team, including linebackers Nick Henrich (Omaha) and Garrett Nelson (Scottsbluff).

Volleyball All-Americans Nicklin Hames and Madi Kubik headline the strong group of Big Red All-Americans. Hames, a four-time AVCA All-America setter from Maryville, Tennessee, earns her bachelor’s degree as a child, youth and family studies major. The Outstanding Player of the 2021 NCAA Austin Regional, Hames will try to lead the Huskers to their third national championship match in the last five years in 2022.

Kubik, a three-time AVCA All-American, will earn her degree as a communication studies major. A member of the 2021 NCAA All-Tournament Team, the 6-3 outside hitter from West Des Moines, Iowa, is a two-time All-Big Ten selection.

The Nebraska swimming and diving team also provides a pair of All-Americans to the list of 2022 Husker May graduates in Autumn Haebig and Audrey Coffey.

Haebig captured All-America honors in both the 200 and 500-yard freestyles at the NCAA Championships in 2021. The advertising and public relations/sports media and communications double-major also earned a CSCAA All-America certificate in the 200 free in 2020. Nebraska’s first-ever Big Ten swimming champion after racing to the 200 free title in 2021, the senior from Grafton, Wisconsin was also a two-time first-team CSCAA Scholar All-American and a four-time Academic All-Big Ten choice.

Coffey was named a CSCAA All-American in the 1,650-yard freestyle in 2020. The senior from Naperville, Illinois, was also a two-time first-team CSCAA Scholar All-American and a three-time Academic All-Big Ten selection.

On the men’s side, four-time NCAA shot put All-American Burger Lambrechts, adds a powerful presence to Nebraska’s list of graduates. Lambrechts who was Nebraska’s Best Male Athlete across all sports in 2021, was also the Big Ten Men’s Field Athlete of the Year following the indoor seasons in 2021 and 2022. He added a fourth-place finish in shot put at the 2022 NCAA Championships after winning the 2022 Big Ten Indoor title. The thrower from Pretoria, South Africa will earn his bachelor’s degree as a mechanized systems management major.

Three-time NCAA wrestling All-American CJ Red also adds clout to the Husker class. Red finished sixth in the 141-pound class at the 2021 NCAA Championships. It followed an eighth-place finish at the 2019 NCAA Championships after opening his career with a seventh-place finish at nationals in 2018. The sixth-year wrestler from Indianapolis, Indiana, earns his bachelor’s degree as a child, youth and family studies major.

All-American Emily Cheramie adds to the class. Cheramie earned CRCA All-America honors in smallbore, air rifle and in the combined disciplines in 2021, when she was also named the GARC Senior of the Year. The English major was also a Big Ten Distinguished Scholar and a member of the CRCA All-Scholastic Team.

Other notable Husker graduates include Dylan LeClair, Nebraska’s 2022 Male Student-Athlete of the Year. The three-time Academic All-Big Ten selection as a nutrition and health sciences major from Townsend, Massachusetts also helped the Nebraska men’s gymnastics team to a trio of top-four national team finishes during his career.

Westenberger recently completed his career with the Nebraska men’s golf team, while Cooke, Young and Zugay provided a dominant academic presence to the Husker soccer team, which features seven May graduates.

The May graduates came from near and far to call Nebraska home during their careers. The group came to Lincoln from 22 states, including 19 native Nebraskans, while 10 more Huskers came to Nebraska from nine foreign countries (Australia, Canada, Denmark, France, Germany, Latvia, Mexico, South Africa, Switzerland).

Nebraska continues to feature one of the highest graduation rates in the country, while leading NCAA Division I in the number of CoSIDA Academic All-Americans (347) and NCAA Top 10 Award winners (18) across all sports.